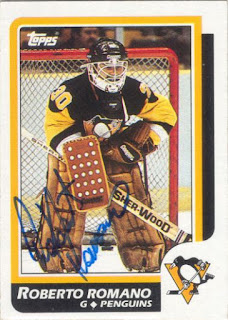 This week's AGM is a guy who almost gave up before his career was able to take off. With the pressures of a young starting goalie in a certain market, it was almost too much for this week's goalie-- but he was able to level himself off a bit and made a decent career for himself. This week, the profile of Roberto Romano.

As an undrafted goalie, Romano finished his junior career as a free agent. The Pittsburgh Penguins signed Romano before the 1982-83 season, playing most of that time in the AHL with the Baltimore Skipjacks. With Baltimore, Romano went 19-14-3 in 38 games, then finishing with an 0-3-0 record with the Penguins that season. For the 1983-84 season, Romano went an impressive 23-6-1 with Baltimore before being called up to the Penguins and going 6-11-0 in 18 games. It wasn't a stellar 1984-85 season, as with Baltimore, Romano posted a 2-8-2 record; but in Pittsburgh-- the record of 9-17-2 was enough to make Romano think about retiring after that season.

Trying to earn his teammates and his organizations trust back, Romano fought back in training camp and was somewhat better in the 1985-86 season, finishing with a 21-20-3 record. It was a hectic split season in the 1986-87 season for Romano, spending five games in Baltimore (0-3-0) while also spending 25 games in Pittsburgh (9-11-2) before adding some other destinations to his resume.

On February 6th, 1987, Romano was traded to the Boston Bruins for Pat Riggin. Romano played one game in Boston that season (a loss) and appeared in relief for one game with the team's AHL affiliate, the Moncton Golden Flames, but didn't figure in the decision. The 1987-88 season saw Romano play for the Maine Mariners for 16 games and ended up with a 5-8-1 record.

After that season, Romano went international and went to Italy to play. From the 1988-89 season until the 1992-93 season; Romano played with HC Merano, HC Bolzano, HC Milano Saima, HC Milano, and Romano gained his Italian citizenship; which allowed him to play for Italy in the 1992 World Championships.

Returning to North America in the 1993-94 season, Romano signed again with the Penguins and knew that the IHL's Cleveland Lumberjacks would be the destination of choice. With Cleveland, Romano went 2-7-2 in 11 games; but due to injuries, Romano was called up to Pittsburgh for two games and went 1-0-1 in that times. After that season, Romano hung up the pads.

For a player who was on a subpar team and almost quit because he wasn't playing up to snuff-- Romano was able to actually rebound (all things considered) and make a steady career for himself. It also allowed him to actually get outside of North America and experience his Italian heritage side and representing that nation.
Posted by ScottyWazz at 8:00 AM