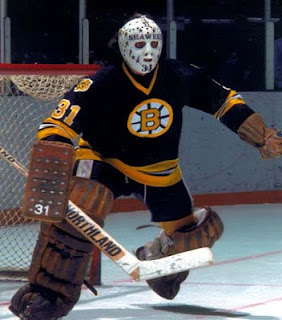 This installment includes a goalie who has his own attachment to a certain Bruins/Blackhawks match-up, though it was in the beginning of the season rather than the end. For a man they called "Seaweed" due to his hair, he had a small shelf-life, but he'll live on thanks to that and being a main part in a well-known novel. This week, the profile of Jim Pettie.

Starting in the 1972-73 season, Pettie played in the OHA for the St. Catherines Black Hawks for 31 games and registering a 5.04 GAA in that span. It wouldn't deter the Boston Bruins from picking Pettie in the 9th Round of the Draft in 1973.

Pettie made the jump to the pros during the 1973-74 season, playing in the IHL with the Dayton Gems, playing in 118 games between the 1973-74 season and the 1975-76 season (no record provided). During the 1975-76 season, Pettie went 12-3 in the Turner Cup playoffs to help the Gems win the Turner Cup. During that run, Pettie played in the North American League for the Binghamton Whalers for five games.

The Bruins gave Pettie a boost in the 1976-77 season, placing him in the AHL with the Rochester Americans, where he would play 43 games and have a record of 26-15-1, then go 6-5 in the playoffs. Pettie was called up to the Bruins and won his only game; which was the first time a Bruins goalie would play against Bobby Orr-- who was with the Blackhawks at the time.

At the start of 1977 training camp, Pettie was roomed with author George Plimpton as the latter was doing research for his upcoming book, "Open Net." Because of that, Pettie was referenced in the book plenty of times. Pettie returned to Rochester for the 1977-78 season, posting a 16-12-4 record in 32 games, while losing his only game when he was called up to the Bruins. During the 1978-79 season, Pettie was up with the Bruins for most of the season, going 8-6-2 in 19 games as the back-up. Also that season, Pettie went 0-7-1 in nine games with Rochester.

Before the 1979-80 season, Pettie was signed by the New York Rangers, but was placed in the AHL with the New Haven Nighthawks, going 16-13-3 in 33 games; then 1-1 in the playoffs. For the 1980-81 season, Pettie played with the Central League's Birmingham Bulls, playing in 21 games with a GAA of 5.50, while also playing one game for the Eastern League's Richmond Rifles, which was a loss. After that season, Pettie would retire.

Not for long in the NHL or hockey in general, Pettie does live on in a well-known book and has the distinguished honor for being the first Bruin to play against Bruins legend Bobby Orr, so despite not much of a stat-line, he'll always have those things to hang his hat on.
Posted by ScottyWazz at 8:00 AM

What a go Jim. It was nice to read about your career in hockey and also to think that you did what you wanted to do and that doesn't come around too many.
TAKE CARE&GOOD HEALTH
DAVID LEE