Thanks For Coming Out, 2013 Los Angeles Kings 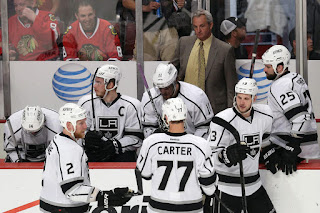 After getting over the hurdles of the first round, the defending Cup champions looked as if they were going to be the team to beat in the West. However, their defense-first mentality just wasn't able to stop the top team in regular season, thus making it 15 years since there was a repeat Stanley Cup winner.

Defensive teams need a solid goalie and that's what the Kings have in Jonathan Quick. After a shaky start-- Quick showed off his Conn Smythe ways in the playoffs and proved himself capable to living up to the long-term deal the Kings signed him to, especially after back surgery in the off-season. The question now lies on whether or not Jonathan Bernier wants to stick around, knowing that he won't get a chance any time soon to be the starter. Of course, he's a restricted free agent and the goalie market will be slim pickings...so odds are he'll stay in LA for the short-term.

Offensively, Jeff Carter was the Cy Young winner in the NHL (much more goals than assists) and helped out for filling the net, while Anze Kopitar kept getting better and better. Overall, the Kings were the solid, evenly distributed team that really had scoring by committee. Outside of Carter, (and maybe Dustin Brown), the goal scoring wasn't too spread out-- which is good for useful getting everyone involved, not allowing opponents to focus on one line or player.

On the blue line, there's a lot of valuable RFAs, but only $11M left. Slava Voynov and Jake Muzzin will probably want their money for their performance this past season, but whether they get it in LA is another story. Yet, with buy-out candidates being mulled over, you can bet the Kings will be able to free up the money to make sure their valuable pieces don't get away from there.

Under Dean Lombardi and Darryl Sutter, the Kings look to be in good hands-- so long as neither of them do anything to divide the room and break apart the great chemistry they have. They were hungry again for the Cup, but just ran into a team with a lot of momentum on their side and a little more fire-power than they could handle.
Posted by ScottyWazz at 11:57 AM