Sakic Not Keeping Up With the Jones 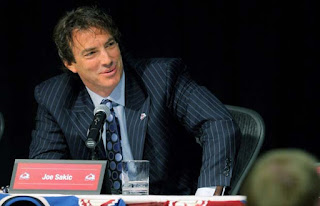 If the reports out of the Denver Post saying the Colorado Avalanche won't take Seth Jones with their 1st overall pick are true, we could see the Avalanche making a once model franchise become the punchline of many jokes to come. While there are many who think Sakic could be using this in order to get a better offer in a trade, odds are that they are serious about taking a forward because.....well, I really don't know why.

While the debate rages whether or not you should pick for need versus picking for want, it seems the Avalanche are taking the latter, thinking that it could boost their offense to pick either Nathan MacKinnon, Jonathan Drouin, or Alexander Barkov. Any of the top-three skaters would help out the Avalanche for the short-term and for personal numbers, the long-term vision may be skewed. Sakic saying the forwards are too good to pass-up is one thing, but on his first months onto his job; it seems that he didn't take a full vision of his roster.

Any of those players will be projects, but it seems that the Avalanche are looking more towards a quick fix with a forward who can blend in with the crowd rather than take the time to build up a franchise defenseman like Jones is projected to be. While Erik Johnson is the top guy on the Avs roster, the depth behind him isn't the best. Jones would be a franchise player and help the offensive output for the defense. With the free agent market being somewhat unspectacular-- the trade market could be the only way for them to improve their blue line this summer.

This whole report is adding to the reunion of the better years that the Avs have put in the front office and behind the bench. It almost seems that, instead of trying to improve the team, the Avalanche are trying to bring the shiny names from the past and preach patience to the fan base as they go through some clunky times. There was a small light with the Avalanche's 2010 performance, but since then it's been quite shaky and doesn't look to be going too much better in the long-term. Not to mention that Greg Sherman is still the team's GM is another target for ridicule for this team, but the bigger legend names who used to be with this team coming on board with the front office mask that as much as the struggles during the season.

Yet, in the end-- Sakic could be swerving everyone and trying to get more talk for a trade for the first pick to leap over the 2nd and 3rd picks to get Jones and make sure other teams don't get there. Of course, if Sakic is misleading people-- especially after saying they wouldn't hire a coach out of the major junior system-- you have to wonder if it's good to have a guy who has no front office being so quick to lie about what's going on with his franchise.
Posted by ScottyWazz at 8:26 AM