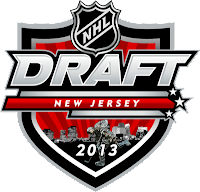 As we await the rest of the Awards and Game Two to start, we must be reminded that we're just two weeks from the annual NHL Draft. While it's only one day this year, many say it's the DEEPEST DRAFT EVER!!! They also say that about every other year, but that's besides the point. Because of the organizational depth, what's on the board, what's on the rankings, and some comments made by prospects about wanting to only play in the NHL, it could cause some havoc after the top three picks.

Now, I will make a note of this-- these picks are how I think some things will play out if the draft board is to remain the same. With the Blue Jackets and Flames carrying THREE first round picks, you can bet they will barter a deal here and there in order to get rid of them and get some roster players to fill out their team. Also, with picks 29 and 30 still undetermined because of the Stanley Cup still going on, I'll put out what the team will do rather than the positioning.

So there's that. All purely speculative and shows I could have as good a chance as any to pick them all right. The crazy thing is that with most teams, you won't be able to figure out their mindset from some picks (Mark Jankowski at 21st over anyone??), but I think this year could be very straight forward with many team playing by the book at least in the first round.
Posted by ScottyWazz at 12:46 PM