On the Topic Of Alfredsson's Departure 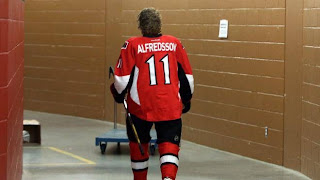 At the end of the day, you cannot blame Daniel Alfredsson.

The emotion of everything that has happened today with the news that Alfredsson is leaving the Ottawa Senators for the Detroit Red Wings; the thing lost in all of this has to be the idea that with the departure of Alfredsson, they actually need to have someone pick up the pieces for contribution. It's a time for Jason Spezza, Milan Michalek, and the other players to step up their game and hopefully find a way to stay healthy in order to contribute more.

Not only that, the void left in the locker room for the Senators is something that won't be as easily replaced as the scoring contribution. For a core of young players, it's a huge hit in trying to turn to someone, but for guys like Erik Karlsson, it will make them grow up a little more and actually learn to become a leader and get the experience by being fed to the fire. Not only that, it'll be a big thing for Paul MacLean to be the motivator that he has shown off to the world with his Jack Adams Trophy campaign this past season.

Yet, the biggest sign this signing to Detroit brings is that Alfredsson doesn't believe himself to be the primary contributor to the Ottawa Senators, as he was being called upon to do. Getting up there with age, it just shows that Alfredsson is at the point of his career where he wants to be able to ride shotgun and let the others actually be the superstars of the team and he can lay back and be the secondary scoring and the leader on the ice by example.

With this, the Red Wings will get some experience they have lost in the past few years with the retirement of Nicklas Lidstrom, Kris Draper, and the like. Alfredsson's voice is something that's respect around the league and is someone who could teach Henrik Zetterberg how to be a leader off the ice, as well as on. Sure, the teaching of that is often futile, but if Zetterberg is willing to learn a thing or two from Alfredsson; it couldn't hurt to get some pointers here and there.

Plus, they get a little bit of consistency out of Alfredsson, who won't bring big goals or assists; but all of his points are very timely and will add more punch to the second power play unit, especially on a big one-timer chance. While it may not completely fill the void and drop-off from Zetterberg and Pavel Datsyuk's points contribution; Alfredsson could give a shot in the arm to the top-six guys.

Most importantly is what the fans of the Senators will do when they meet their new division rival Red Wings this season. They will be mad, regardless of what Alfredsson says his reasons are for leaving Ottawa. The wounds of this signing is going to be hard to make heal with time or at all. I'm sure long after Alfredsson has retired, he will be welcomed back by the Ottawa faithful as Mr. Senator-- but for now, there's bitterness, tears, and a lost feeling trying to find out what went wrong between the Sens and Alfie.
Posted by ScottyWazz at 11:08 AM