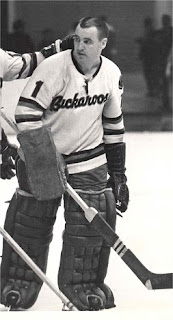 After a week off, the AGM this week focuses on a goalie who stayed to his amateur roots for longer than most in order to play in the Olympics. After that, he took another less taken road by going out west. This week, the profile of Don Head.

Starting in the Junior B system with the Weston Dukes during the 1950-51 season, Head would move forward during the 1951-52 with the Toronto Marlboros for 37 games, winning the Dave Pinkney Trophy for goalie with the best goals-against average for his team. Head would return to Weston for the 1952-53 season to end out his junior career.

Going the amateur route with Senior Hockey, Head played for the Stratford Indians from the 1953-54 season until the 1955-56 season, playing in a total of 74 games over that span. Head moved to the Windsor Bulldogs in the 1956-57 season, where Head would go 30-17-3 in 50 games, six wins by shutout. During the 1957-58 season, Head moved to the Chatham Maroons of the Northern Ontario Hockey Association and would play there for two seasons for a total of 96 games. Returning to Windsor for the 1959-60 season, Head used it as a tune-up for his role for Canada in the Olympics.

Head would pilot the Canadians into a solid position in the Olympics, going 5-1-0 in the seven games he played in, but they were upset by the United States, relegating the Canadians to take silver.

Starting in the 1960-61 season, Head moved onto his pro career with the WHL's Portland Buckaroos, where Head went 38-23-9 in his 70 games, then going 10-4 in the playofs to help Portland to the WHL title-- the Lester Patrick Cup. Head would win the WHL's Rookie of the Year award and Outstanding Goaltender Award for fewest goals-against on the season.

Portland would trade Head to the NHL's Boston Bruins ahead of the 1961-62 season, where Head would play in 38 games for Boston, posting a 9-26-3 record. Head would also spend five games in Portland that season on loan, going 3-1-1 in those games.

The Bruins traded Head back to Portland before the 1962-63 season, where Head would rebound from his NHL downside with a 43-21-6 record in 70 games, then 3-4 in the playoffs-- which was enough for another Outstanding Goaltender Award. Injuries hampered Head for the 1963-64 season, playing in only 16 games and having a record of 6-9-1; but Head would get back to play a majority of the games for Portland in the 1964-65 season, posting a 26-20-4 record in 51 games played, then 8-1 in the playoffs; helping Portland to another Lester Patrick Cup as champions.

Head's workload would decreased starting in the 1965-66 season, playing in only 36 games and finishing with a 20-12-3 record, sharing an Outstanding Goaltender Award with teammate Dave Kelly. During the 1966-67 campaign, Head played in 44 games for Portland, going 26-13-5, then 0-3 in four playoff appearances.

Head was inducted into the Oregon Sports Hall of Fame thanks to his time and achievements with the Buckaroos.

Though he had a cup of coffee in the NHL (which resulted in a Sports Illustrated cover....sort of) and Olympic glory, Head's contribution in the the semi-pro side of things made him a memorable aspect of Pacific Northwest sports lore. Though it might not be the big time for most, Head make the most of it and succeeded quite well due to it.
Posted by ScottyWazz at 8:00 AM