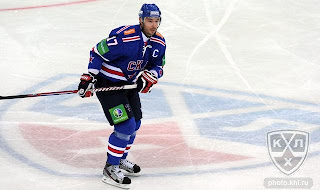 With Ilya Kovalchuk retiring from the NHL to return to the KHL, it not only shocked the hockey world in their reaction to it all, but it also made people question about if it was about being homesick or something more to it. While Kovalchuk could make $15-20 million a year, he did express interest in staying over in the KHL even after the lockout was resolved-- so the money may not have been the true issue. The factor of Olympics could be another factor, as the NHL and PA haven't decided yet on participation.

This whole scenario could spring up a much more interesting conundrum in the future when it comes to Russian superstars. For a while now, the KHL has been an alternative for many minor league players and some players at the end of their careers. Yet, with Kovalchuk going over to the KHL in his prime age, would this be the thing that finally makes the KHL a viable option for other players to ship off to and maybe leverage their NHL team into contract demands??

Sportsnet's Jeff Marek did bring up the idea of Kovalchuk being the modern day Bobby Hull, though rather than bringing free agency into the NHL fold-- Kovalchuk's move could make many NHL teams force their hands and their wallets in order to keep their talent from jumping ship. Though many have reviewed the KHL as not well run, especially the lower tiered teams, if enough talent can come over-- the money will be found one way or another.

Not only that, but with the league expanding into Croatia this season, as well as Finland and Italy in 2014-15 and Norway, Poland, and Switzerland for 2015-16; there should be a lot of money and a lot of variety to go around in terms of where some players want to play. Even if the top North American players don't go over, the role player threatening to go overseas could cause much overpayment to the players that won't live up to it and will make fans and pundits alike sweat heading towards this CBA's ending.

Going the other way, the crop of Russians have hit a lull when it comes to those who have played in the NHL. Some of that is due to mismanagement, some of it due to not being the right fit; but you can definitely see that the likes of Pavel Datsyuk, Alex Ovechkin, and Evgeni Malkin aren't too much on the horizon. While the jury is still out on Nail Yakupov, it's probably safe to say that he could be the last of this generation to come over and have a bit of success in the NHL.

With the KHL influence on the National players, it has made many NHL leery over selecting a Russian in fear that they may never come over, which is probably why Valeri Nichushkin dropped in the Draft due to his adamant feeling about playing in the NHL or else he'll go to the KHL to make the big money. That's also a reason why Evgeni Kuznetsov has stayed in the KHL, though the Caps are confident he could be over next season. That KHL money and the influence to the younger players that this is their league to take over when they get older and they should have pride in their national league, as much as the North Americans have with the NHL.

As this whole thing will completely settle itself out, it does give a lot more to talk about than just development camps, lingering free agents, and upcoming arbitrations. Not only that, it makes some fans worry about what their top player could do with this development. Kovalchuk could be the first domino to fall or just the exception to the rule of Russian players.
Posted by ScottyWazz at 11:35 PM