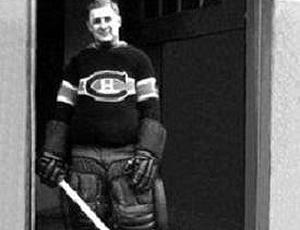 When it comes to goalies, it's always a rough task to come on in an emergency situation like an injury. Even worse back in the olden times when only one goalie dressed at a time as the concept of a back-up hadn't been invented as of yet. However, this week's AGM had the task of going in for, at the time, one of the most heralded teams in the NHL to that point with only an amateur background to boot. This week, the profile of Alphonse "Frenchy" Lacroix.

Playing in the amateur ranks allowed for Lacroix to be selected for the 1924 Olympics by the USA, where Lacroix went 4-1-0 in his five games played and helped the US to a silver medal. Lacroix would return to the Unicorns for the 1924-25 season, playing in 21 games and ending up with a 15-6-0 record.

In November of 1925, the Montreal Canadiens signed Lacroix as an emergency goalie. When Georges Vezina started to cough up blood on the ice due to an undiagnosed tuberculosis; Lacroix would play in five games and going 1-4-0 before yielding the crease to Herb Rheaume for the duration of the 1925-26 season. Lacroix would spent the 1926-27 season under contract with the Canadiens, but not play a game with them that season.

Lacroix returned to the amateur ranks, playing with the Providence Reds of the Can-Am League in the 1927-28 season, posting a 1-3-0 record in four games. Also that season, Lacroix played for the Lewiston St. Doms in the Northeast League and went 8-12-2 in 22 games played. Returning to the St. Doms in the 1928-29 season, Lacroix went 3-1-0 in four games, then 2-1 in three playoff games. Lacroix would return to the Can-Am League in the 1929-30 season with the Reds again, playing in only one games-- which was a win. In the 1930-31 season, the Boston Tigers would use Lacroix in net for four games, where Lacroix went 1-3-0 before he would retire after the season was over.

Having to come into the NHL with no professional background and take over for a legend like Vezina is a taunting task for someone who actually had professional games under his belt. However, with a silver medal in tow and a decent amateur background-- Lacroix did what he could in the emergency situation.
Posted by ScottyWazz at 8:00 AM