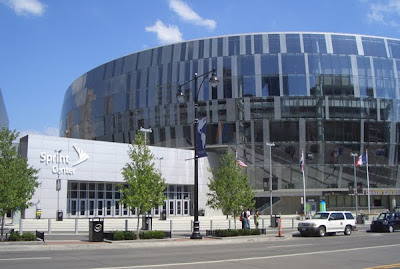 For those who are following the TSN's summer series this week of "Why Not Canada??", their series of why couldn't there be another team in Canada; then you'll know that it's a bit of the same stuff people spout off most the time when it comes to relocation or expansion-- the normal cities come up: Winnipeg, Quebec City, Hamilton, and Toronto. We all know these cities would be able to sustain; but in reality, the act of it happening seem to be slim.

So, whilst we worry about what's going on with Ilya Kovalchuk and then where Marty Turco will back up; it's time to go off and wonder the semi-yearly thoughts about what US cities could be a destination of expansion or relocation. If nothing more, much like TSN putting this on-- this all filler and no killer.

KANSAS CITY, MISSOURI: The arena is build, state-of-the-art (pictured above), and already hoped to have a team for the time it opened. Yet, it is now almost three years old and there's only been assorted concerts, NCAA basketball tournaments, and arena football. Hell of a way to use the $276M spent on this arena. And yes, they have had the same issue where they had a team before and it didn't work out; but so did Denver and Atlanta and they got teams back. Sure, this could be another Atlanta issue, but don't know if you don't try-- especially if you move Atlanta to Kansas City-- then it's a push. The KC area is somewhere that seem like it could get the exposure based on their media rankage at 31st in the entire US; but even with the new arena-- is the area ready for a team. Granted, it'd be something new outside of the Chiefs and Royals, both whom get menial support; yet would it be something people would come out to make work?? Doubtful, but always worth a try.

PACIFIC NORTHWEST: There's always been a big push for either Seattle, Washington or Portland, Oregon to get a pro hockey team, being close enough to Vancouver to have some kind of rivalry based on territorial right and being one of the markets that the NHL has really never represented, unless you count the old PCHA....which I don't. The Pacific Northwest does have quite the hockey heritage with the Portland Rosebuds being the first US team to compete for the Stanley Cup (1916) and the Seattle Metropolitans being the first US team to win the Stanley Cup (1917). However, since then-- pro hockey hasn't been the hot topic. While both areas are very solid with major junior hockey teams; I don't know how well the pro game would be accepted. While the arenas in both arenas are under 20-years old, whether they'd be filled if a team got there (even if an owner stepped forward) is another story entirely.

HOUSTON, TEXAS: While it may be a wild-shot in the dark, but Houston had been mentioned in early expansion and relocation issues in the late '90s and early '00s and with the Toyota Center there, it could be a solid place to get a team into there. Granted, they get 6,000 for the AHL's Houston Aeros; the argument of whether or not they'd be able to get big numbers for the big clubs that happen there. Plus, they'd displace the Aeros, who have a decent history there from the WHA to the IHL to now in the AHL. I'm sure the NHL could take over the name and keep the tradition going, but if they'd have the clout to work it out for the best will always remain to be seen.

There's plenty others, but these three are the big places that a team could possibly work. Sure, the conversation about whether or not they'd be able to draw the big crowd if they moved there will always be there. You'll always get the debate of if these places are better or worse than another, if they deserved a team in the first place, and this, that and the other. The whole debate about relocation and expansion is silly until the NHL is actually serious about doing it. However, it's always a topic of great fun, great debate, and probably war amongst other factions that'll make the internet worth having. That said-- this is what summer is all about because you'll surely get these debates through and through, as it is always the Summer of Relocation.
Posted by ScottyWazz at 11:30 AM