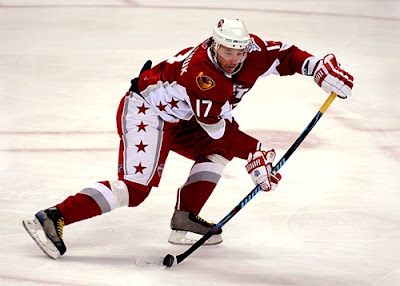 While it seems that Ilya Kovalchuk is biding his time to make his decision, it's an annoyance to many who just want it over by now. For two days, the hockey world has been waiting to see where this year's biggest unrestricted free agent will go. While many have him going to New Jersey, will it be that exciting if he does or will it be a huge letdown??

Especially with everyone expecting Kovalchuk to go to LA, for him not to go there would probably be the most shocking thing. They seem to have the need for him, the money for him, and the spot for him, with the players that could compliment him and a system that could work with him. So why not go there in order to make things work out. It seems he's reluctant to play on the West Coast, which I could understand. Not just dealing with the LA traffic, but the travel out West is insane, so for a guy so used to staying in the same time zone-- his effectiveness on the West Coast could be the biggest reason why he's going to balk at the idea of playing out West.

So, while the LA thing may not work out, would New Jersey be such a bad thing?? For the short-term, not so much; though they would be back into an issue of the salary cap and it'd be harder to make some of the contracts disappear. Plus, they'd have to make decisions on some key players pending on how much Kovalchuk receives in his contract. Especially with franchise player Zach Parise becoming a restricted free agent next season and looking for a raise more than likely, some things will have to be moved-- like Patrik Elias or Travis Zajac or another higher priced player. Is the skill and ability of Kovalchuk worth blowing up your team for?? If you say it is, like it seems Lou Lamoriello is thinking-- then you can afford to do that without second-guessing. However, I think most GMs wouldn't think that way.

On a fan level, how much of a letdown will this be if the end result is that he's staying where he was traded?? The big thing when he was traded to Jersey was that he wouldn't be staying there after the season. If he stays there, it seems like a big to-do about nothing; which really puts a sour feel on the whole UFA market, since there really hasn't been too much of a shock in terms of who signed where. If the biggest UFA doesn't do anything, then we sit and watch what will happen with the remaining players, if anything-- which probably won't be as dramatic-- nor would it be dramatic if Kovalchuk stays in the swamp.

Whatever may come of it-- the grasp that Kovalchuk has on the fans of the NHL is amazing. Especially when Kovalchuk's agent, Jay Grossman, said it'd be over on Monday-- guess he just added to the drama of the whole thing-- and that could have worn down the spirits of fans, as well. Also, if Kovalchuk signs in New Jersey; Grossman could run for mayor of Newark, New Jersey with three of his clients, Kovalchuk, Anton Volchenkov, and Johan Hedberg, signing with the Devils this off-season.
Posted by ScottyWazz at 8:30 PM