Like was put forth by The Girl in her look at the Tri-City Americans yesterday, the key for this project is to get more inside the name of some of the unique team names. If anything, the Bridgeport Sound Tigers encompass that in that they have a very unique name and identity. In fact, so much so; many people think the location of the team is Bridgeport Sound, much like Owen Sound of the OHL. However, the city of Bridgeport is it's own entity, yet the name does have to do with a sound.

For this, I went to the Bridgeport Sound Tigers and got a great response from the Sound Tigers' Marketing Assistant, Mr. Tom Morris. The insight he provide from the team's name and how the color palette today came about.

When it came to the name, it's broken up in two bits. First, the Sound part of it has to do with the Long Island Sound. "The Sound, as it’s commonly referred to around here, is a huge part of the city’s economy and serves as the link to Long Island. We have been affiliated with the NHL’s New York Islanders from day one, so this stresses the link between the two organizations." Morris continued with the Tigers side, "Tigers are the key attraction at Bridgeport’s Beardsley Zoo and are also symbolic of the Barnum and Bailey Circus, which began in Bridgeport. P.T. Barnum is an iconic figure here and even served as mayor of Bridgeport at one point."

So, the name serves a very historical and symbolic pattern to the team and area. It's very apropos when including the Sound and having the symbolism that links Long Island and Connecticut, much like the Islanders connect to the Sound Tigers. While I'm sure I had some kind of idea of the Long Island Sound being a part of it, now that I definitely know about it-- makes it that much more awesome of a name.

Many of you may or may not know that the Sound Tigers were the first team on BroadcastMonsters.com and the old BCM Hockey Network that the Face Off Hockey Show is apart of and still is, though under the new All-In Broadcasting incarnation. When the team first started, their jerseys and color scheme was very unique and while they were connected with the Islanders, didn't have much of an Islanders trace to it, as shown below. 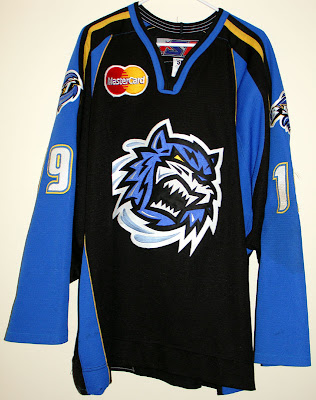 However, that's when the Sound Tigers were working as an ownership independent of the parent team. Morris went on to talk about why the team changed from that motif to a the color scheme closer to the Islanders.

"The change in colors came when the Islanders owner (Charles Wang) purchased our team, as well. The idea was to emphasize the affiliation to the benefit of both organizations, building the Islanders fan base in Connecticut and cross-selling the minor league team to die-hard Islanders fans who want to keep up with the team’s prospects. We tweaked our colors last year ahead of the Islanders upcoming change to new vintage-themed uniforms."

That change you can see on this photo below this text. 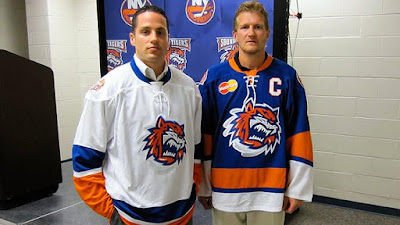 With all of this, the Sound Tigers seem like the perfect fit to this project. The name is something that many people may seem silly, but when you dig deeper into it, the meaning of name is a perfect fit to not only the affiliation, but the town as well. These are the connects that will mean much more than having most fan voting systems to pick names.