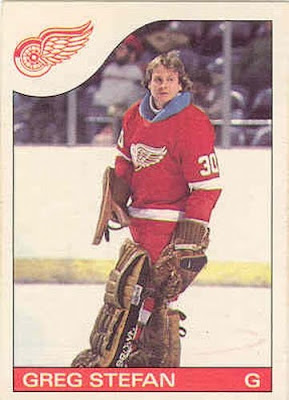 There has been a rash of goalie who have had a short-fuse. Plenty of them like to dusk it up because the net is there area and they don't want anything to happen around it. However, this week's AGM has had a string of dust-ups and even got ejected for sparking a bench-clearing brawl when he was sitting on the bench and not even suited up. Not many of them, however, were confused for a soon-to-be legend. This week, we look at the career of Greg Stefan.

Stefan was born in Brantford, Ontario and was childhood friends with Wayne Gretzky, as they grew up in the same neighborhood. Interesting fact is that Stefan and Gretzky looked alike and when Gretzky got tired of signing autographs during a tournament in Quebec; Gretzky passed his jacket off to Stefan and let Stefan sign Gretzky's name for the masses. There has been a rumor about Stefan signing Gretzky with a "s" and not a "z" but nothing confirmed.

Stefan's career started off after being picked fifth overall by the Oshawa Generals in the OMJHL (now OHL). He would start off in the 1978-79 season, playing 33 games behind Georges Gagnon with a 4.88 GAA for the season. The 1979-80 season would bring difficulties for Stefan, as he would only play 17 games fighting it out with Jamie Boyer to back up Rollie Melanson. Stefan would go 8-6-0 with a 3.88 GAA in that season. Stefan would take over the starting role in the 1980-81 season, but would miss some games toward the end of the season due to being suspended six game for breaking his stick over Brett Wilson of the Toronto Marlies in March of 1981. Despite that, Stefan played 48 games and went 23-14-3.

Thanks to his performance, Stefan was selected in the seventh round of the 1981 NHL Draft by the Detroit Red Wings. He immediately went into the Red Wings system in the 1981-82 season with the Adirondack Red Wings of the AHL. Stefan would play behind Larry Lozinski going 11-13-3 with two shutouts and a 3.78 GAA in 29 games. Stefan would also see two games of action in Detroit, going 0-2-0 in this appearances. Stefan would go up to the Red Wings as a full-timer in the 1982-83 season, playing in a rotation with Corrado Micalef, Gilles Gilbert, and one appearance by Jim Rutherford. Stefan would play 35 games, going 6-16-9 on a dismal Wings team. While he would battle off some injuries on the 1983-84 season, Stefan improved his game and went 19-22-2 in 50 games, but when 1-2 in the playoffs. The 1984-85 season saw Stefan get less games due to missing a month with a shoulder injury, but went 21-19-3 in his 46 games, again only playing three playoff games and going 0-3. During his shoulder injury, however, Stefan got ejected while on the Detroit bench during a game in February 1985. The Minnesota North Stars head coach Glen Sonmor said Stefan sucker-punch Stars' player Tom McCarthy, which incited a bench-clearing brawl.

It got crazy in the 1985-86 season, as Stefan would miss the first eight games because of a stick-swinging incident during the 1985 playoffs. Later, during the season-- Stefan was suspended six more games for another swinging incident in December. With all of that, Stefan played 37 games and went 10-20-5 on the season. It was a bounce-back year for Stefan in the 1986-87 season, as he was feeling pressure from Glen Hanlon as a back-up, but Stefan would go 20-17-3 on the year, as well as going 4-5 in his nine playoff games. Hanlon would usurp Stefan's starting role in the 1987-88 season thanks to a knee injury to Stefan, though he would get a good amount of time in-- playing 33 games and going 17-9-5 and then going 5-4 in 10 playoff games, before getting beat out by his buddy Wayne Gretzky's Edmonton Oilers. Stefan would be injured during Game Two of the Edmonton/Detroit series after getting hit by Craig Simpson. Stefan would have a relatively healthy 1988-89 season, playing through some back pain and going 21-17-3 in 46 games, but had another short playoff-- going 2-3 in five games.

The 1989-90 season would be a short one for Stefan, as he would only play seven games (1-5-0) before suffering a serious knee injury during a game in late November; tearing up his ligaments. He would play only three games in January of 1990 with Adirondack (1-0-1), but would get the surgery in March of 1990 to repair his knee. Stefan returned to Detroit's camp, but would need more surgery before the 1990-91 season. It wouldn't be until February before Stefan would return to action, but would only play two games in Adirondack before re-injuring his knee, which led him to retire as he wouldn't have another surgery to his knee. He left his playing days at age 29.

His days in hockey weren't done, as he would start coaching in 1993 with the Detroit Jr. Red Wings as an assistant and would be with the team in their first OHL championship in 1995. Stefan moved with the team when they moved to Plymouth and became the Whalers; but Stefan would be offered a position by the Carolina Hurricanes, who's GM is Jim Rutherford; an old goaltending partner with Stefan in Detroit. Stefan did everything in the Hurricanes organization from a scout to assistant coach and actually got a Stanley Cup ring as a scout in 2006. Stefan would return to Plymouth to be the head coach in 2007, but would have troubles going 16-20-3 when he took over the team in the middle of the 2007-08, then getting ousted in the first round. He would come back for the 2008-09 season, but after getting off to a 6-11-3 start; he would step down and head back to the Hurricanes in a scouting role, but was let go earlier this month (July 1, 2010) by the Canes.

While he did have some famous friends, he managed to make a name for his own and have a decent career. While he did have to go through some injury issues and some attitude issues; Stefan did his best and succeeded to stay in the NHL even with those things working against him. He had a go afterwords, and saw some success there; but the future remains to be seen on what he'll do next.