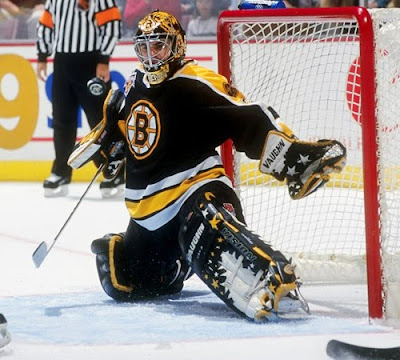 Coinciding with the celebration of Canada Day and the Fourth of July, this week we'll focus on a goalie who was from the country that each nation succeeded from. We go to jolly ol' England for this pick and one who a little more recent, but still somewhat remembered, if for the woes that was his career. This week, we'll look at Byron Dafoe.

Born in Sussex, England; Dafoe's family moved to British Columbia when he was a teen and started playing goalie with the Juan de Fuca Whalers in the BCJHL. Dafoe played 32 games in the 1987-88 season and ended with a 4.51 GAA. The 1988-89 season would see Dafoe move to the Western Hockey League's Portland Winterhawks, where he would take over the starter's role. Dafoe saw 59 games, going 29-24-3 and 10-8 in the playoffs for the Hawks. Dafoe got enough exposure as the Washington Capitals picked him in the second round of the 1989 Draft, which was 16 picks after the Caps picked another goalie, Olaf Kolzig, in the first round. These two would see a lot of each other.

Dafoe would go on the Washington Capitals French tour at the start of the 1989-90 season, going 0-1-0 in his two games, but would be returned to the Winterhawks. With the Hawks, Dafoe had a rough year with a 14-21-3 record in 40 games. During the season, Dafoe and Kolzig would duke it out during an on-ice fight between the Winterhawks and Kolzig's Tri-City Americans. Quite the fight for position it was. The 1990-91 season saw Dafoe only play eight games with the Hawks (1-5-1) before being dealt to the Prince Albert Raiders, where he would fair somewhat better with a 13-12-4 record with the Raiders.

Dafoe would make the jump to the pros, spending a majority of 1991-92 season with the Baltimore Skipjacks where he would go 12-16-4 in his 33 games, but would also make stops with the Hampton Roads Admirals in the ECHL for 10 games (6-4-0), while being loaned out to the New Haven Nighthawks of the AHL for seven games (3-2-1). Dafoe outdueled Kolzig in the training camp to get a spot on the Skipjacks with Kolzig being loaned out to the Rochester Americans. Dafoe played 48 games with Baltimore in the 1992-93 season going 16-20-7, as well as a call-up to the Capitals for one game in relief of former AGM Jim Hrivnak. The 1993-94 season would see Dafoe and Kolzig dueling it out again in Portland, Maine with the Pirates. Dafoe would see the majority of time in the starter's role, playing 47 games and going 24-16-4, but Dafoe was called up by the Caps late in the season (2-2-0), including two playoff games (0-2); which gave Kolzig the spot for the Pirates in the playoffs; but Dafoe was along for the ride as the Pirates captured the Calder Cup as AHL champions. Dafoe and Kolzig would share the Hap Holmes Memorial for fewest combined goals-against.

With the 1994 NHL Lockout, Dafoe got moved to the IHL and the Phoenix Roadrunners. With the Roadrunners, Dafoe played in 49 games and went 25-16-6 before going back to Portland and playing six games with the Pirates and going 5-0-0, as he would get a call-up late in the season with the Caps; going 1-1-1 and appearing in a playoff game in relief of another former AGM, Jim Carey.

Yet, with the logjam in net for the Caps, Dafoe couldn't prove himself worthy and would be dealt with Dmitri Khristich to the Los Angeles Kings for the Kings' first and fourth round picks in the 1996 Draft. Dafoe got into town just as the Wayne Gretzky era in LA was ending, as the Great One would be traded midway through the 1995-96 season. Dafoe would split time with Kelly Hrudey in net that season, getting 47 games in with a 14-24-8 record. The 1996-97 record would see former AGM Stephane Fiset battle with Dafoe for time, almost evenly split. Dafoe would get a litte better in the season, 13-17-5 in 40 games, but it seemed that Dafoe would be pushed out by Fiset and young Jamie Storr, who was coming up through the Kings ranks; leaving Dafoe the odd-man out again.

So in the summer of 1997, Dafoe, again with Khristich, got traded by LA to Boston for Sandy Moger, Jozef Stumpel, and a fourth round pick in the 1998 Draft. Dafoe was flung into the starting role quickly, as he beat out former AGM and Caps running buddy Jim Carey for the gig and Dafoe wouldn't disappoint for the Bruins. In the 1997-98 season, Dafoe would play in 65 games and go 30-25-9 with a 2.24 GAA and .914 save percentage. Dafoe would keep the magic alive in the 1998-99 season, playing 68 games in the season, topping his marks from last season going 32-23-11 with a 1.99 GAA, .926 save percentage, and 10 shutouts; though the case about the "dead-puck" era being thrown into play, it's still pretty impressive. Oddly enough, during that season, Dafoe got into another scuffle with, who else, Olaf Kolzig. During a big brawl, Dafoe got into it with the Caps' Dale Hunter and Kolzig with Ken Belanger before the goalies squared off. The two pretty much held onto each other, getting some licks in; but nothing serious as both were seen smiling. The two were friends, as Dafoe was Kolzig's best man for the wedding Kolzig had month's earlier; Dafoe returning the favor years later.

The 1999-00 would be a rough one for Dafoe, as he would only see 41 games; missing the start due to a contract holdout and missing the last quarter of the season to knee surgery. Much worse was Dafoe's numbers, which saw him have a 13-16-10 record coupled with a 2.96 GAA and .889 save percentage. The injuries continues in the 2000-01 season with Dafoe missing 24 games in the season with knee and hamstring issues, but his numbers would improve. In 40 games, Dafoe would have a 22-14-7 record with a slightly better 2.39 GAA and .906 save percentage. Dafoe got back into his groove, uninjured in 2001-02 season and getting back to his 60+ games (64) and getting a career high 35 wins (35-26-3); but the Bruins and Dafoe would falter in the playoffs, being the top-seed and being knocked off in six games by the bottom seeded Montreal Canadiens in the first round.

Dafoe fell out of favor with the Bruins, much doing with his contract demands and his inability to perform in the playoffs. Dafoe was let loose to find a new home for the 2002-03 season, which wasn't an easy task. It was almost a month-and-a-half into the season before the Atlanta Thrashers signed Dafoe to a contract. Dafoe would struggle plenty, having to back-up Pasi Nurminen for the most part after Dafoe started 2-7-0 for the season, ending the year with a 5-11-1 record in 17 games. It was more of the same in the 2003-04 season, with Dafoe playing 18 games, going 4-11-1 for the year, which marked the end of his run in the NHL.

While he took off the 2004-05 season, Dafoe would try the Russian League for two games in the 2005-06 season, but it was short lived before he finally hung up the pads.

We have mentioned through this article about Dafoe and his relationship with Kolzig, which continues to this day as both founded Athlete's Against Autism, a group which brings awareness to Autism; an affliction that both Kolzig and Dafoe's sons have.

It took a while for Dafoe to get going, but once he did; he held his own. He had plenty of glory during the regular season, but couldn't seem to get it done when it counted the most. He had to deal with logjams, disputes with management, and his own injuries; but made a nice living for himself. Even though Dafoe had to battle to get anywhere in the game, he was able to create some solid relationships through the battles and come out probably for the better of it.
Posted by ScottyWazz at 8:15 AM