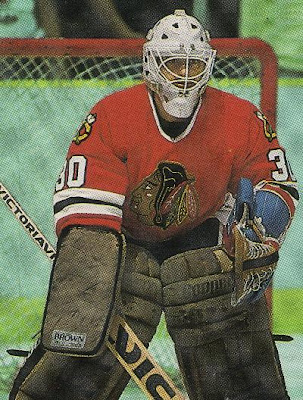 With the debate raging on about the rules when it comes to recruiting players for the NCAA and how it will deal with schools losing out to major junior teams, we'll take a look at a goalie who played both sides of the game before the rule of a major junior player being unable to play in the NCAA if they played in major junior. We'll look at the career of Alain Chevrier.

Chevrier would start off his journey in the QMJHL with the Cornwall Royals, but only saw seven games of action for the 1978-79 season, something that would not get him much notoriety if he wanted to progress onward with his career. He would spend 34 games with the Ottawa Jr. Senators of the OJHL and would come out with a 3.93 GAA, but it would not be enough for Chevrier to stay in the major junior scene of things. It seemed that he may have to give up and presue other venture outside of hockey, which saw him move from his home in Cornwall, Ontario to attend Miami University of Ohio in Oxford, Ohio.

While the Miami-Ohio program was in it's infancy when Chevrier joined for the 1980-81 season, playing as an independent team. It saw Chervier get in 16 games with a 3.39 GAA and took home the Rookie of the Year prize for the team. When Miami-Ohio joined the CCHA in the 1981-82 season, Chevrier was along for the ride, but only got in 19 games and had a so-so season, going 8-10-1. His playing time would increase in the 1982-83 season, playing 33 games and going 15-16-1, helping Miami-Ohio get to the CCHA tournament; but they lost to Ohio State on aggregate goals in their two-game set. For his senior season in 1983-84, Chevrier had a rough issue for his last 32 games, going 9-19-1 and leaving on a down note.

Undrafted and out of school, Chevrier went out to push his wears to the minor leagues; for which he got picked up by the IHL's Fort Wayne Komets for the 1984-85 season and would actually be the winner of the huge pool of goalies the Komets had. That pool included former AGM's Pokey Reddick and Daniel Berthiaume; as well as Hannu Kamppuri, Dave Parro, Gil Hudon, and Luc Guenette. Chevrier played 56 games and went 26-21-7, helping the Komets get into the playoffs; where he would go 5-4 in nine games, being eliminated in the second round.

Chevrier got noticed by the New Jersey Devils, who signed him to a contract for the 1985-86 season; though the Devils had a logjam in net of their own. Chevrier would have to fend off Chico Resch, Kirk McLean, Sam St. Laurent, and former AGM Craig Billington to get his 37 games in, in which he would go 11-18-2 on a very subpar Devils team. Chevrier would become the defacto starter for the 1986-87 season, beating out Billington, McLean, Karl Friesen, and another AGM Chris Terreri. Chevrier would have a better season, going 24-26-2. Chevrier would split time in the 1987-88 season with Bob Sauve and then returning from Olympics Sean Burke, which saw Chevrier only get 45 games going 18-19-3 with a solid-for-the-time 3.77 GAA.

Thanks to the logjam, Chevrier was traded on July 19, 1988 (hey, an anniversary) to the Winnipeg Jets along with a 7th round pick for Steve Rooney. Chevrier would be in another logjam in Winnipeg, behind Reddick, Berthiaume, Tom Draper, and another AGM Bob Essensa. Chevrier would play only 22 games going 8-8-2 before he was on the move again.

In January of 1989, Chevrier would be traded to the Chicago Blackhawks for a fourth-round pick in the draft. Chevrier would be thrown into the starting role thanks to struggles from Ed Belfour and other AGMs Jimmy Waite and Darren Pang. Chevrier had a hot hand in 27 games going 13-11-2 and would be the starter for the playoffs; getting the Hawks to the Campbell Conference Finals before losing to the eventual Cup Champion Calgary Flames. Chevrier would get caught up with a competition with another AGM Jacques Cloutier for time in the net-- only getting 39 games in going 16-14-3 before he was on the move once again.

Chevrier would be traded in March of 1990 to the Pittsburgh Penguins for future considerations. However, it would be a short stint for Chevrier, who only got three games in with the Penguins, going 1-2-0 before not getting re-signed by the Penguins.

For the 1990-91 season, Chevrier got picked up by the Detroit Red Wings as a free agent, but only saw three games of action (0-2-0) in the NHL as he would spend most of the time in the IHL, where he started his pro career. Chevrier would play with the San Diego Gulls for 32 games, teaming up with Scott Brower, Glen Hanlon, and Mark Reimer in net. For his 32 games, Chevrier would go 10-16-1 and with no other work in the NHL available, Chevrier hung up the pads after that season.

While Chevrier's whereabouts are unknown, it goes with two topics going on with what's happening now with the Major Junior vs. College debate and what to do when goalies can't find a job (read: Marty Turco) and what they could do in the future and know when to say when. Though he did find a way for himself by going to the minors, it seems that option is no longer viable with all the minor leagues being affiliated with NHL teams and lack of independent teams. Chevrier was the last of a dying breed of getting noticed through the minor league route, which may be something that needs to be looked into to get more diverse talent into the NHL....or not.
Posted by ScottyWazz at 8:15 AM