Revisiting the Ghost of Roller Hockey Leagues Past 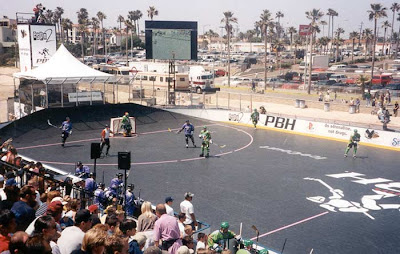 Wrapped up in the excitement of the Draft, pre-free agency trades, and then the Free Agent Frenzy; the IIHF is pimping the hell out of the InLine Hockey World Championship in Sweden with the top eight teams in the Top Division and the other eight in the Division I part of the things. It seems like quite the ordeal for those who are hockey deprived. The interesting thing is that no one knew about this, including some that were unaware of USA Hockey even having an Inline National Team. I know my old home rink back in Maryland-- the Gardens-- has a league in many divisions, as they shutdown their main rink (for all intensive purposes) for the Inline league.

But it's easy to miss the allure of the inline hockey landscape. The fact that there lacks a bigger-than-house league for the inline hockey and little exposure for the sport. It did seem the hot topic for the early-to-mid 90s, because of the migration of hockey (and Wayne Gretzky, let's be honest) to the "Sunbelt" and the lack of ice that is there. Sure, people had street hockey by playing on feet, but never did you have the inline attachment to it all. Once it started to catch on at the grassroots level, then the bigger scale seemed to take note and it started to be seen to the masses.

It all started with former Stanley Cup winner Ralph Backstrom, WHA co-founder Dennis Murphy, and famous name having Larry King (not that one) forming Roller Hockey International in 1993. They were able to score a TV deal with ESPN2; which-- at the time-- was on the angle of "out there" sports and unconventional events; it displayed the league very well. The league started with 12 teams spanning from Anaheim to Toronto with stops in places like Calgary, Salt Lake City, and New Haven, Connecticut. It seemed like a decent success, with the 1994 season having double the amount of teams they did in 1993; moving into Atlanta, Montreal, Sacramento, and Las Vegas. However, the league blew it's load way too quick, going from 24 to 19 in 1995; then 18 in 1996. The big hit was taken when the league had 10 teams in 1997 spread all over North America, which definitely made the teams struggle financially-- so much so that the league took a year off in 1998, only to be recreated in 1999 with eight teams before the league finally ceased to be after it officially went under in 2001.

The RHI did have a number of former NHLers join the ranks of the inline league; which included former AGMs Petr Skudra and Daniel Berthiaume, as well as current NHLers Manny Legace and Glen Metropolit and legends Tiger Williams and Bryan Trottier. If nothing else, it gave an outlet to those fringe players, and many goalies, the change to play all year-round. The Anaheim Bullfrogs won two championships in the RHI and made it to four finals. It left use with great names as the New Jersey Rockin' Rollers, Calgary Rad'z, Vancouver Voodoo, and Edmonton Sled Dogs.

After the RHI falter, ESPN2 had another brain child to not only take the roller hockey idea, but add an even more extreme aspect to it and adding the beach, as well. That's how we got Pro Beach Hockey, which started in 1998. The concept was simple: six teams playing each other in a single rink in Hunington Beach, California. The extreme aspect was that behind the nets, there were these quarter-pipe-esque ramp, creating more speed for the players around it, more mayhem because of it, angled glass behind the net to maybe some set plays to ring it up and around the goal to the player in front of the net; and the kicker-- the 2-point line. What could go wrong??

Well, the fact there were only six teams was a start, but it did make it easy enough to follow. More fancy team names-- like the Dawg Pac, Web Warriors, and Salsa. They had motivating factors, like teams getting paid based on standings and the pretty girls on the beach in the outside atmosphere. While they had a lot of RHI players coming over, a sponsorship deal with Franklin Hockey, and a TV gig; PBH only lasted three seasons before ESPN cut off their sponsorship of the league, thus making it fade into the background, leaving us wanting more ramps.

Nowadays, the way to get the fix is Major League Roller Hockey, which was the real resurrection of RHI. The MLRH started in the 1998 season and has continued on, with only two stoppages in 1999 and 2008 due to some conflicts of teams. The league even went to a Super League with the North America teams, as well as teams in the United Kingdom and Czech Republic. It also has branched out to MLRH2 and MLRH AAA and AA, as well. Though it's located mainly on the Eastern seaboard, the appeal is there for players who want to get into another level with the game. Even better team names with this one: Tampa Bay Rollin' Thunder, Chicago RollerSnakes, DC Mad Dawgs, Ohio Wheelz, and Charlotte Outlawz.

Alongside MLRH, the largest inline tournament in the world, NARCh (North American Roller Hockey Championship), which started for amateur teams in 1994 and continues to this day; the most teams being in 2008 with 435 teams in North America. Another big tournament, which a little more pride to it is State Wars, which takes players from each state and they play to see who's the best of the 50 states from around the US. There are different age levels and a provides another side motivator in the competition.

While it may not be a big deal anymore, there was a time where inline hockey shined. Thanks to the West Coast and "Sunbelt" swing of the NHL teams, including the NHL sponsored NHL Street, and the Mighty Ducks skating through random malls and vacated basketball courts; roller hockey was just getting started before it all came crashing down. With Sweden winning the last three IIHF Inline titles, you can tell who is taking note of the possible next uprising of roller hockey. Here's hoping the US or Canada (who took a decade hiatus from the IIHF tourney) will find a new crop of inline players to get North America back to competitiveness.
Posted by ScottyWazz at 10:35 AM

Still one of the best post game interviews ever came from Pro Beach Hockey. When "Losing Team Goalie" was interviewed after the game, turned to the ESPN2 reporter and said "I was thinking about jumping out in front of a bus, but I figure that would just go through my legs too."

I used to play at in the Gardens Ice House league. It is amazing how quickly inline hockey and all of the stores that supported it dissapeared. I play pick up hockey now at a park in Germantown, Md. Ridge Road Park they have a great inline rink with boards and goals set up.