When Listening is a Waste 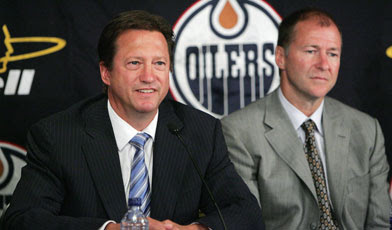 According to TSN's super sleuth Darren Dreger, Oilers GM Steve Tambellini is listening to offers for the first overall pick in the Entry Draft. As of yet, Tambellini hasn't heard the right deal to trade for. In the end, there probably won't be any deal that's good enough for a rebuilding team like Edmonton to move the first pick and have their pick of the litter in order to be a cornerstone to the rebuild.

Let's be honest, though-- the kind of deal will have to be extreme for the Oilers to actually move the pick. It's a deal that most sane teams probably wouldn't do mostly because the asking price will be way too much for a young kid who probably won't hit his full potential until a few years after he's drafted. Plus, any supporting cast that he may have had would be traded the other way in order to get him. It's detrimental for the team trading the roster players for the pick because you're going off on possibility rather than reality. Plus, it's not like Edmonton is the most desirable place for players to play, as I have pointed out before. Who's to say many of the players traded would actually play to their potential if they aren't happy with the trade-- another risk that the Oilers would have to deal with in trading the pick.

The thing that I don't get is why would anyone be willing to trade away the first pick overall. Rather than tease other teams, why not just shut it down after the lottery saying you won't move it because the return probably won't be worth it unless it's for two of the top-ten in points the season prior. In fact, the last two times the first overall was moved was by the Florida Panthers in successive years and they were for the third overall pick both in the 2002 (which was Rick Nash for Jay Bouwmeester) and 2003 (Marc-Andre Fleury for Nathan Horton); both of which were Mike Keenan drafts and definite losers on both accounts.

While you did have instances like the pick being traded on the trade deadline; not knowing about the pick being the first overall, like 1998, Vincent Lecavalier's rights traded twice, then 1982 when the picks was traded in July of 1981 between the Boston Bruins and Colorado Rockies; that actually turned out better for the Colorado franchise (which moved to New Jersey) when Ken Daneyko at the 18th pick was better than Gord Kluzak. Once more in 1980 between Montreal and Colorado, where the deal was done in September of 1976 of all times.

In fact, the last time roster players were traded for the first overall pick was in 1975; when the Philadelpha Flyers traded Bill Clement (energy vampire), Don McLean, and the 18th overall pick for the first overall; which the Flyers used to pick Mel Bridgman. The Caps picked Alex Forsyth with the 18th pick and played exactly one game with the Caps; his only NHL game.

As history tell us, there's little to no chance that the Oilers will trade this pick and for them to say they are entertaining offers is a bit off the deep end and just something for people to talk about during the time from the end of the Stanley Cup Finals and the Draft...or maybe the awards show. While it's nice of Tambellini to throw people that bone, in my mind-- it's just mindless talk to get the crazy rumor mill going which will produce nothing by idiocy from all over the internet. It will take too much in order for the Oilers to give up the pick-- which is something little to no teams would do-- though I'm sure someone will come up and amaze me by doing that. Though it would make people forget the time span until the season actually starts.
Posted by ScottyWazz at 12:05 PM

Or energy source...it's your choice!