Boucher to the Bay and Arniel's New Jacket 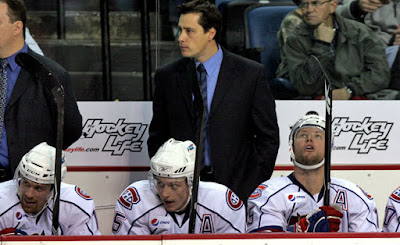 A lot of hustle and bustle while most of the world was trying to sleep, but now-- it seems to be a little more clear and we can actually discuss it all.

First, hours after he turned down a deal with the Columbus Blue Jackets; Guy Boucher accepted the vacated job of the newly revamped Tampa Bay Lightning, which marks the first of many moves for new GM Steve Yzerman. Boucher, who won the AHL coaching honors with the Hamilton Bulldogs this season, would be the youngest coach in the NHL at age 38.

And while the Jackets fans will be disappointed, if you had a chance to start with the likes of Vincent Lecavalier, Martin St. Louis, and Steven Stamkos in the line-up and Steve Yzerman as your boss....you'd probably take that job, too. Nothing against Columbus, but with the Bolts; it's a whole new page in that organization history. New everything in there and probably very little expectation, with the exception of trying to forget the past few years of mismanagement from the previous ownership.

Boucher has been successful at every level he's coached at, from Major Junior where he was a coach in the Memorial Cup twice, once as an assistant in Rimouski with Sidney Crosby in the spotlight and once as a head coach with Drummondville, where he won the QMJHL title during his tenure. He was throw into Hamilton and succeeded there, even when the Canadiens calling up the best players on the Bulldogs, Boucher guided the team to 52 win this past season and got them to the final four in the AHL. Seeing as he's able to deal with young talent, it should be a good deal for the youngsters like Stamkos and Victor Hedman; but the interesting thing will be how he's able to deal with the vets on the team and how much he'll have to adapt to that situation.

With Boucher going south, the Blue Jackets are seemingly going with sort of the same mindset with a Canadian AHL team, setting their sights on Manitoba Moose head coach Scott Arniel. Arniel has been in Manitoba for four season coaching, going 180-106-33 in his years there, losing the Calder Cup back in 2009 to Hershey. However, that was the only time that the Moose were out of the second round under his watch; which could be good or bad because they did get to the playoffs, which the Blue Jackets need at this point.

Yet, Arniel should be just fine with Columbus, especially after expectations weren't reached last year after their first playoff appearance in 2009. While the team is still learning and Steve Mason will hopefully get his magic back, which he seemed to lose this past season. Arniel has been on many people's list over the past few years and now will get a chance to show that he's as good as advertised, even if it could be a test in patience with a team that many people don't know how to judge. There's times where it seems they're one piece away from being an elite team and others where they look like an expansion team year-after-year.

Now that the coaching issue is done, Howson now has to look at what to do to give Arniel the chance to succeed. One point was to get someone to play with Rick Nash, as well as to pick up the slack should Nash have a slump or is out of the line-up due to injury. Also another defenseman could be crucial as well, but the partner for Nash would and should be top priority.

All in all, the teams seemingly had their #1 or #2 guy; as the Jackets did have an immediate back-up when Boucher turned them down. And it's a good thing they got it done quick, especially with the NHL Draft coming up in about two weeks. While the impact will probably not be immediate, the good thing for both of these guys is that they are going into situations where not much is going to be expected. Both franchises are going to be rebuilding from the bottom up in some situations and anything they accomplish will be taken away as a moral victory and building block into the future.
Posted by ScottyWazz at 9:00 AM