An Ode to Stan 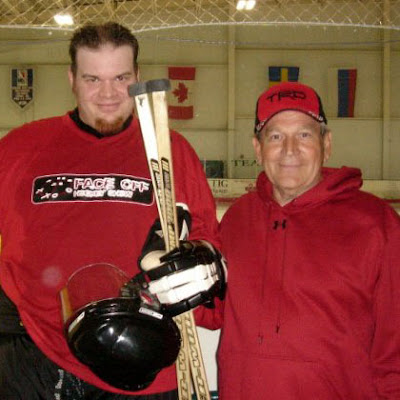 Next to me in that picture is Stan.

Stan is a guy who is always there for a laugh. He's always there for an intriguing thought. He always has an antidote for something and god knows he'll let you know about it, even if you don't want to hear it. He always made his opinion known and because he was hard of hearing (legit) for most of my life; that's probably why I'm the loud, boisterous person that I am when in conversation. Stan is a friend to everyone and really easy to get along with-- a trait I inhabited from him. He also saved me from being Stanley Junior.

Stan exposed me to hockey when he was able to get numerous tickets to Washington Capitals games because he did work around the Capital Centre and was able to make friends and score some tickets every now and again. That exposure got me to love the game. Since we were 45 minutes from Landover, Stan and I had some father/son time while driving too and from; drives that to this day we remember.

Most importantly, Stan was my motivation when playing hockey. He always got up for the early games, drove me to the 6am practices playing pee-wee, always up for the early road trips up and down I-95 during my travel year. Never a discouraging word for me, mostly because he picked up the game through me play and watching games with me on TV. He always made little points hear and there when up in the stands, but most importantly told me that regardless of what happened on the ice, as long as I had fun out there-- nothing else matter. Sure, he loved when we won-- but at the same time; the one season we had a rough year-- he always said one thing to get my mind off the loss and made me realize it was just a game. I briefly ramble on about my life in hockey over at the old Cycle Like the Sedins site.

Even to this day, even with his surgeries on his back when his life got down in the dregs-- when we talked and got through the current events-- it went right back to hockey; though he doesn't keep up with it because I'm not back in Glen Burnie to hog the remote. He listens to the show from time to time and encourages me to do what I need to do in order to succeed in what I want in life. He said that while life is a bitch, things in the universe happen to balance themselves out and happen for a reason. He always tells me to enjoy myself and to not sweat the small stuff-- because if you do; you'll never get anywhere and be a bitter, bitter person.

While Stan was a stern man, he's a fair man. He'll also tell you why not to wear sandals in Key West. Most importantly, Stan is a helluva father and really what I try to mold my fatherhood with little Kaity. I owe a lot to Stan, more than he knows or more than I'll share-- but thanks to him, I'm the person I am today. Which is either good or bad, all depends on how you view.

Happy Father's Day, Stan.
Posted by ScottyWazz at 8:15 AM

not gonna lie, I teared up with this one. well said.

Great post! Best of luck for the both of you and greetings from Finland! Been reading your blog for a few weeks now and will surely continue to follow you daily :)

Loved reading this. Stan is awesome (and so are you!)