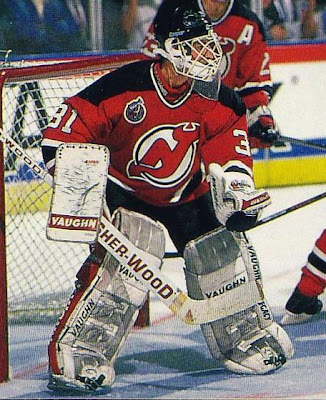 There are few guys who have been as innovative as this guy. If not for this guy, the odds of water bottles being on top of the net may not have happened....for at least a few more years. That notwithstanding, he is the last starter of the New Jersey Devils before the Martin Brodeur era came into town, something that may or may not be used in any kind of trivia. This week, we look at the career of Chris Terreri.

The Providence, Rhode Island native started his career with the West Warwick Wizards in high school before committing to Providence College. Terreri got off his freshman year with only 11 games in 1982-83, but played admirably; going 7-1-0 with two shutouts and 1.93 GAA. That was good enough for the New Jersey Devils, who drafted Terreri in the fifth round of the 1983 Draft. His sophomore year, Terreri would play behind Mario Proulx in net, seeing a much different result-- playing in 10 games with a 4-2-0 record and higher 3.07 GAA. In his junior year in 1984-85, Terreri would make Providence proud, first going 21-15-5 on the season; while propelling the Friars to the first every Hockey East championship, beating Boston College 2-1 in the Championship game. That would move them onto the NCAA Tournament, where the Friars would be in tough in the first round, winning by one goal on aggregate against Michigan, then beating Boston College in the Frozen Four in three overtimes. However, the magic would run out with RPI beating Providence 2-1 in the finals. Terreri would take NCAA Tournament MVP, NCAA All-Tournament Team, and Hockey East MVP for the season.

I mentioned in the opening, the water bottle being utilized. During that three overtime game in the tournament, Terreri and BC goalie Scott Gordon skated to their nets during one of the overtime periods and placed a water bottle on top of their nets. It was the first time this practice was used and showed a sign of solidarity, as both agreed to take one rather than having the playing field unbalanced. Bob Froese was the first NHL goalie to use a water bottle in those 1985 playoffs, though the Islanders called foul on Froese and the Flyers at first, the bottle stayed (because it was velcroed to the net) and it went into practice full-time the next season.

Terreri would close out his college career in the 1985-86 season, not being as fortunate as the year before, going 6-16-0 in his 22 games, closing it out on a disappointing note. He would, however, go play for the United States in the World Championships, playing in five games with one shutout, despite the country finishing 6th.

Terreri would then move onto the pros, playing mostly for the Maine Mariners in the AHL in the 1986-87 season, backing up Kirk McLean. Terreri played 14 games, going 4-8-1 while in Maine, but did get a call-up to New Jersey, playing seven games and going 0-3-1 in his games at the first part of the calendar year.

The 1987-88 season saw Terreri stay out of the pros for the first part of the season, joining the US National Team in order to play in the 1988 Olympics in Calgary. He would play 26 games in preparation, going 17-7-2 in the warm-ups, but only got action in three games behind Mike Richter, going 1-1-0 in his games, as the US would finish 7th. Off the high of the Olympic experience, Terreri would go to the Utica Devils of the AHL, where he would put up an impressive 5-1-0 in his seven games played. The 1988-89 season had Terreri in a starter's role in Utica, getting in 39 games to prove himself and going 20-15-3; which got him a call-up to New Jersey, but more troubles going 0-4-2 in the eight games of action.

In the 1989-90 season, Terreri was the full-time back-up to Sean Burke in New Jersey. Terreri did see a good amount of time and actually was able to prosper while in New Jersey compiling a 15-12-3 record; his most successful in Jersey to date. He would be tested in the 1990-91 season, as he would get much of the starter's time, as management disputes with Sean Burke left Terreri as the main guy. Terreri did well when thrown into the fire, putting up a 24-21-7 record and went 3-4 in the playoffs. With Burke sitting out the 1991-92 season, it was put onto Terreri, who performed so-so with a 22-22-10 record, going 3-3 in the playoffs, as the Devils were ousted in the first round again. There would be split time with Terreri and former AGM Craig Billington in the 1992-93 season, which saw Terreri lose his grasp on the gig; going 19-21-3 on the year.

Terreri would start off the 1993-94 campaign as the starter, but while his numbers were alright, he was warming the seat for the prospect behind him-- Martin Brodeur. Terreri had an impressive 20-11-4 season with a 2.72 GAA on the defensive Devils team. Terreri saw less time in the 1994-95 shortened-season, playing 15 games and going 3-7-2. However, Terreri was along for the ride during the playoffs, which he was able to get a Cup ring for it-- as the Devils won their first Stanley Cup. Terreri started off in New Jersey for the 1995-96 season, but only got four games (3-0-0) in before he moved off the East Coast for the first time in his career.

In November of 1995, Terreri was traded to the San Jose Sharks for a second round pick in the 1996 Draft. Terreri would take over the starting role on the lowly Sharks, playing in 46 games and going 13-29-1 record in San Jose. In 1996-97, Terreri would be behind newly-acquired Kelly Hrudey and only get 22 games in, going 6-10-1, but with an impressive 2.75 GAA and .901 save percentage. Even still-- it wasn't enough to keep him in town long.

In January in 1997, Terreri, along with Ulf Dahlen, Michal Sykora, and conditional draft pick were traded to the Chicago Blackhawks for Ed Belfour. Terreri would only get seven games in during the season, but had a 4-1-2 record in those games. Terreri would get the starting gig for the 1997-98 season, but due to a fractured finger and strained groin (not at the same time), he would only get 21 games in and lose his gig at the #1 spot. He would go 8-10-2 in Chicago and 2-0-1 in his three games of rehab with the IHL's Indianapolis Ice.

Terreri would go back into a familiar place in the 1998-99 season, as the Blackhawks traded Terreri back to the New Jersey Devils for a conditional pick. Terreri knew his role in New Jersey, playing behind Brodeur once again. The 1998-99 season only yield 12 games for Terreri, but he was up to the task, with an 8-3-1 record. In the 1999-2000 season, Terreri was less impressive, only having a 2-9-0 record in his 12 games, but would be on the roster for yet another Stanley Cup ring, as the Devils defeated the Stars to win their second Stanley Cup. Prior to the 2000-01 season, Terreri was picked up in the Expansion Draft by the Minnesota Wild, but he was traded back to the New Jersey Devils with a 9th round pick for Brad Bombardir. Back with the Devils, Terreri got 10 games in and went 2-5-1 before the Devils knew he couldn't be a viable option anymore.

At the 2001 Trade Deadline, Terreri and a 9th round pick were traded to the New York Islanders for John Vanbiesbrouck. Terreri would only play eight games for the Islanders, going 2-4-1. When he knew he couldn't hack it, Terreri hung up the skates....temporarily.

After his retirement, Terreri caught on as an assistant coach with the then-affiliate of the Devils, the Albany River Rats. Thanks to some injuries, however, Terreri had to strap on the pads once more during the 2005-06 campaign, as he would come in net for relief of the River Rats goalie, letting up four goals in 31 shots in 40 minutes of play, as well as getting the loss to his credit. Terreri now serves as goalie coach for the Devils affiliate in Lowell.

You could see that it took awhile for Terreri to grow accustomed to the level of play that he was playing at, but when he finally got into his comfort zone; he excelled very well. He has many individual and team accolades to be proud of and his experience of getting accustomed to new levels should pay off when the Devils finally get the need for young goaltenders in their system.
Posted by ScottyWazz at 8:15 AM

Chris did not play for West Warwick, he played for Pilgrim High School in Warwick, RI. Before that, as a squirt playing for Warwick Jr. Hockey Ass., Chris almost single handedly won the national championship. Chris was the most intense competitor I have ever witnessed!

Interesting note, Greg. The Legends of Hockey site has him playing for West-Warwick in '81-'82. Thanks for the correction.

My Dad went to school with him!!! and there still good friends its pretty awesome to know an NHL player on a personal level!