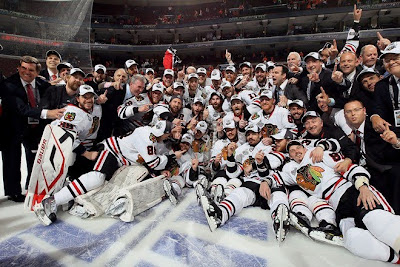 First off, I CALLED IT!!

Second, like I said on my Twitter-- it's a damn shame that former GM Dale Tallon (now with Florida) couldn't be there on the ice to celebrate with the team that he pretty much created from the bottom up. I'm sure it's a bittersweet moment for him to see the team he help build do the laps with the Cup.

That said, it was a folly by Tallon that made the Hawks have to really get to this moment with this team, especially with the money that was doled out to the likes of Marian Hossa, Brian Campbell, and Cristobal Huet. Notwithstanding, the Hawks were able to pull it off and win the Stanley Cup for the first time since 1961, snapping the longest drought to date for years between the Stanley Cup.

Now, the inevitable question of what's going to happen next with this team.

Up-front, the likes of captain Jonathan Toews, Patrick Kane, David Bolland, and Hossa will be there for the long-term, but Tomas Kopecky, Troy Brouwer, and Dustin Byfuglien having one year left and Kris Versteeg and Patrick Sharp with two years left; it makes you wonder how they're going to dance around it. Obviously, Byfuglien will be a big guy to get signed due to his versatility and intensity; but could you get rid of the other guys without having to deal with any big shake-up. Versteeg and Brouwer are great when a man-down, but could you have other guys come up at a lesser price. Sharp and Kopecky could just be cut down to a numbers game, even with their secondary scoring ability at times. Even all of that: Adam Burish, Ben Eager, Bryan Bickell, and Jack Skille all need contracts for next season, plus the likes of Kyle Beach and Akim Aliu knocking on the door to get into the big club. I do not even GM Stan Bowman trying to figure this mess out in time for next season.

Defense is no better for Bowman, who has Campbell with six more years at over $7M, Brent Seabrook needing a new contract after next year and probably looking for a raise, Duncan Keith, who has 13 years left at a $5.5M cap-hit; all the while having Brent Sopel with a year left and probably trade bait and needing to sign others like Niklas Hjarmalsson or Jordan Hendry or someone else to fill out the six defense; though Byfuglien could drop back to play some and kill two birds that way. While the Hawks may have a great core of players, the odds of them staying together are going to be rough to manage. Again-- not envious.

Even more over, Antii Niemi is without a contract after this year and his Cup win will only make his asking price higher. Offer sheets may be out there, but even so-- the Hawks may do anything to keep him, especially because the faith in Huet is lost and Corey Crawford may still not be the answer, even though he's been waiting in the wings for the longest time. It'll be hard to deal Huet's contract, especially with two years left and ability to collapse like a house-of-cards on a windy day. This could be the biggest situation to fall on the Hawks, as Niemi did keep the Hawks in it more often than not when the going got tough.

Joel Quenneville definitely earned his keep and showed that his pick-up was something that was definitely needed for a team this young and with this kind of skill set. And while Bowman did inherit a gong-show of a payroll, they got the job done they needed. Rocky Wirtz did what his father couldn't and made hockey relevant again in Chicago and the fans came out. If anything, Wirtz could be....check that...is the savior of this market and could be looked at by many on how to conduct business even when you have a lot of strikes against you from a previous ownership.

Regardless of what's going to happen next year, in two years, or whenever-- the Chicago hockey fans should revel in this victory. They need to take it all in and enjoy every minute, as it may be fleeting. They believed in the new direction and the kids did alright. Let the worries begin in July-- the fun needs to continue through June.
Posted by ScottyWazz at 12:30 AM