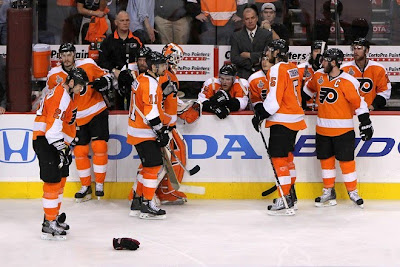 All good things must come to an end and it finally did for the Philly Crew. After all the turmoil that this team had gone through-- the goalie carousel, the coaching change, winning on the last day in a shootout-- the Flyers were much better than a seventh seed in the Eastern Conference and it showed as they were within two games of winning a Stanley Cup. However, they have plenty of momentum to build on.

Daniel Briere's performance in the playoffs shows that he is able to produce and is worth his money that GM Paul Holmgren has put into him over the long-term. Captain Mike Richards showed his try guts and really stepped up when needed, despite a disappointing output in the Finals. True warriors are the duo of Jeff Carter (playing with essentially two broken feet) and Simon Gagne (out with various injuries), who will have contracts up at the end of next season and the organization will have to shuffle some money around if those guys will be there beyond next season. While Daniel Carcillo (RFA), Darroll Powe (RFA), and Aaron Asham (UFA) are the only forwards without contract next season in all of this, the Flyers look pretty solid up and down the roster regardless of their re-signings.

The two issues result in the back-end. First, the defense, where Chris Pronger and Kimmo Timonen account for a cap-hit of $12.5M for the next three years, while Matt Carle and Oskar Bartulis are the only other defensemen with contracts next season. Decisions will be made about Ryan Parent (doubtful) and Braydon Coburn (very likely) when it comes to their RFA status, but there's going to be little money to go their way; which will hurt them in terms of depth. Even so, Pronger and Timonen showed they can still long huge minutes without wearing down too much, though fatigue could have been the reasoning for many of Pronger's penalties; though you couldn't deny how much he did rattle the Hawks for the first four games of the Finals.

The other problem is what to do in net. With little money to go around and Brian Boucher the only goalie signed to a deal-- this is where the Flyers will have to get creative. There's no doubt that Michael Leighton was the reason this team was able to get as far as they did and played very well, though it finally caught up to him in the Finals. He should get a contract, but the reality of the situation is that if he asks too much, he will be priced out of the franchise. Odds are the Ray Emery experience is over, which has promise; but was mediocre at best. While Sebastian Caron and Johan Backlund are probably gone to UFA, Jeremy Duchesne and Michael-Lee Teslak could be re-signed to AHL deals. Verdict is still out on the future of Nicola Riopel.

Full marks to Peter Laviolette, who was a big part of the turnaround and motivating the team when they were down. Paul Holmgren should be congratulated, too; but he has his work cut out for himself in the off-season. He'll have to find a way to mix things up in order to get the right guys paid and the wrong guys out of the room. He seems to have the magic touch and probably will be able to get what he needs to get done before the start of the 2010-11 season.

All in all, the Flyers have a lot to build off of, but they have a small window to repeat a performance with the group they have. The money issue is going to catch up to them soon enough and then they will have to hope for the best with the new crop of Flyers coming through the doors of the Wachovia Center. It was a magical run that got the city back up for hockey again and while it was a disappointing ending, the memory will remain fresh for a while.
Posted by ScottyWazz at 11:55 PM