On the Topic of the NHL Going Green 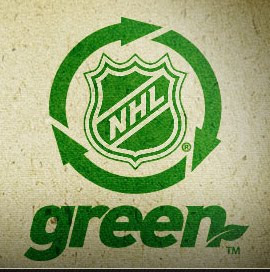 Have you heard about the NHL Green initiative?? If you haven't, you probably aren't alone because I just heard about it today when surfing around trying to find something to write about. I don't know if it's just me, but I find this whole thing a bit odd for the NHL; but I'll touch on that later.

The NHL promoted a lot of the Green thing during the Draft. In their press release, they touted that many of the teams were staying in hotels within walking distance to the hotel (which is usually the case in most drafts), that most of the signage was made of recycled materials, there were recycle bins on the Staples Center concourse, and unsold, prepared food was donated to a food bank. Granted, using those stats when it come to LA is a bit odd, mostly with all the smog created. If you were on the I-405 like me, you know that there were many people not going "green" at all. What can you do?? Yet, it's a good ideal for the NHL to promote and with all that signage the NHL Draft carries, it's solid to tout that.

That said, the NHL was been doing some features about how some of the players were doing their own thing with the Green initiative; like Martin Brodeur using energy efficient light-bulbs and Scott Niedermayer using a zero-emissions car. Yet, at the same time-- there's only so much you can promote before it gets stale. Like with the arena features they're doing-- it's the same story, but different city and a slight change here and there; but it's the same gimmick over and over again. Sure, a noble cause-- but something that will lose its shelf life sooner or later and people will get it very easily.

The interesting part that I see in all of this is the fact that the NHL probably uses the most energy in regards to the other sporting leagues, sans NASCAR, because of the engines and stuff there. Still, the ice surfaces uses a lot of chemical and a lot of energy to keep the rink cool and to keep the people in the stands warm-- a rough balance. Plus, the arenas have to use more energy the deeper a team gets into the playoffs thanks to the seasonal changes, which is probably something that's counterproductive to the whole cause. Plus, you have those Sunbelt teams who have to use a lot of energy because of the climate location where they are at, but that's something you could probably assume from the start. It seems that a lot of these things, coupled with the stuff on the concourse and people driving to the events, roadtrips or otherwise; you're not really doing too much for the cause. Plus, when it's really tucked away into the NHL interweb sphere; the message isn't really getting out there and putting that message of going Green to the masses.

While it's a good idea to have this cause put out there by the NHL, the fact they aren't pushing it too much and haven't really thought of the counterbalance that is produced in the arenas makes you wonder if this is just for show or if the league is actually looking at some things to really reduce their "carbon footprint." Maybe making the schedule shorter and having more outdoor games are the answer....the latter happen twice this coming season; the former probably never happening. Good on the NHL for putting forth the effort to make the league more eco-friendly, but unless they keep it up and do something more than just the PR push-- it's an empty gesture.

As least we know that Dion Phaneuf is this plan, right Sean Avery??
Posted by ScottyWazz at 1:45 PM

Email ThisBlogThis!Share to TwitterShare to FacebookShare to Pinterest
Labels: NHL, NHL Draft, NHL Green, On the Topic Of...