On the Topic of Hossa and Bourque 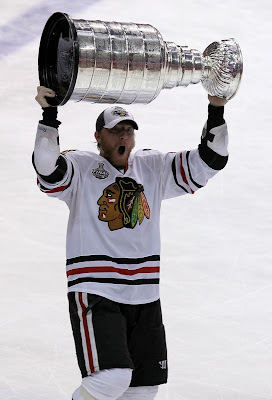 I don't know why this thought came across my mind, but it just randomly hit me as I wake-up to the fact that the hockey season is over. However, it is my belief that Marian Hossa's Cup moment is BETTER than Ray Bourque's moment. While, both were able to get the Cup directly after the captain; I think there's more of a relief off of Hossa lifting the Cup than Bourque lifting it up.

While both moments are great, the sense of relief I felt for Hossa after twice being denied the chance to lift it in consecutive years, then signing a 12-year deal-- many wondered if he'd be ever able to win the Cup after the bad luck he had, including the shoulder injury to start the year. For a guy who was so close for the past two years; the weight off his shoulders is tremendous and you could see the excitement in his face once he got passed the Cup, almost reluctant to touch it because he thought the others were more worthy to touch it after Jonathan Toews, then when he got it-- you knew he didn't want to let it go.

Conversely, the Bourque moment was a nice, touching moment; but it wasn't like Bourque ever got close to it before-- which is something that may have made his moment emotional for the fact it was it third Finals appearance, first in 11-year break in-between; the last time being swept in 1990 against Edmonton. While the emotion was there, I think Bourque could have lived with himself and been able to sleep well at night if he hadn't won a Cup. Granted, that wouldn't have made up for him not being able to win the ultimate prize, but he would have always been know as one of the best defensemen in the modern era.

But at the same time, both did win Cups. Great players like Dino Ciccarelli, Marcel Dionne, Mike Gartner, and Darryl Sittler do not have Cup rings, but still considered to be some of the best guys out there. That's a list that Bourque would have fell into, but probably not Hossa-- especially in the era that he is playing in.

With all that said-- both were very touching and relief moments for both of these players. Granted, if you ask me-- Lanny McDonald's moment in 1989 was the best. Being the captain for the clinching game and being the first to touch the Cup after winning it; his first in his 16-year career-- now that's a way to go out.

My point probably isn't right to some/to most/to anyone except me; but I'm sticking to it. Let me know how you feel in the comments.....or not.
Posted by ScottyWazz at 4:45 PM