Halak to St. Louis; The (Carey) Price is Right for Montreal 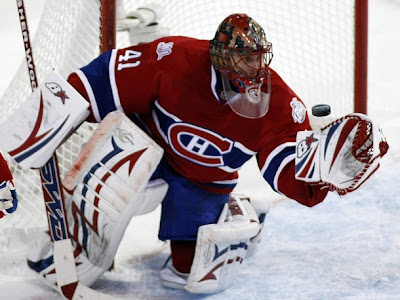 In what could just cement the thought of John Davidson's hockey mind being one of the best out there; his St. Louis Blues come out of nowhere to acquire Jaroslav Halak from the Montreal Canadiens for Lars Eller and Ian Schultz, two of the Blues prospects.

With all the Blues have done in their short time of rebuilding, this is a PERFECT part to fill out the roster. Nothing against the possible goaltending, but the addition of Halak is going to give the Blues a shot in the arm they need and probably something they will need in order to finally move onto the next step. Granted, that is if Halak's run with the Habs last year was any indication of what he could do throughout the whole year. Odds are the Blues will be able to sign Halak, as Mason is a UFA and Conklin still has a year left, while the Blues has $28.5M locked up in 11 players thus far. John Davidson will find a way to get Halak signed.

That said-- it's now up to Carey Price to carry the Canadiens....that is if Cedric Desjardins doesn't bypass him during training camp and becomes the starter that way. This is such an interesting news for the Habs and their fans, as it seemed primed for Halak to re-sign and be the starter for the foreseeable future. Halak was the one who pretty much carried the team with his play, but maybe because of that-- he priced himself (no pun intended...if there is one) out of the Canadiens' long-term plans, especially with the Habs doing so much with Price and putting so much into his future over Halak, even though it seemed a scenery change would have been the best of Price after his struggles this season. Time will tell if that's still the case.

However, the Habs get two decent prospects. Eller is one of the top ones for the Blues and he has had two goals in his seven games with the Blues, while putting up 57 points in 70 games with the AHL's Peoria Rivermen in his first pro season in North America. Eller was highly touted when playing in Frolunda in Sweden and really turned it on once he got more time with the team. You can expect the same if he's in the top-6 fold for the Habs. Ian Schultz is like a Dustin Byfuglien mold-- a big-body forward, who's not afraid to mix it up in front or drop the gloves when needed. Plus, he has some decent hands and could create some plays, as well. It's not like the Habs are getting completely hosed, but it could take some time to bring these guys up-- which is something that won't go over well at all with Habs fans.

Rioting in Montreal is happening through Twitter and probably in sports bars in the area. This is not going over well and nor should it. That said, it will be a wait and see. Halak's heroics could be a one-time deal and he may lose his luster, while Price gets confidence back from this and actually lives up to expectation. Hey, crazier things have happened, but you can't do anything until the first year is done on this trade. At least this will be actual news before the draft happens.
Posted by ScottyWazz at 1:30 PM