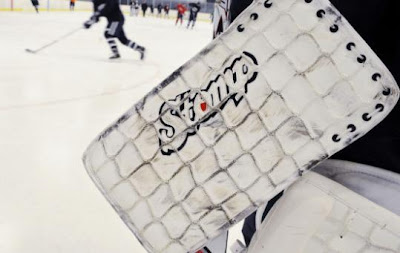 With all the things that have been done when it comes to goalie masks, this new trend could take the cake. We've seen that goaltenders can put some fancy patterns on their pads, like that of Trevor Kidd and Kevin Weekes, but what Trevor Leahy (not any relation to Sean Leahy, that I know of) has done with his new pads is something that I'm surprised no one has thought of before hand.

The Pingree School senior thought of ideas for his new pads and came up with something uber-unique: net patterned pads. As you see in the picture, that's the design for his blocker, the illusion of the twine behind the net is what catches the eye of the shooter; which is bound to fool any forward. So far, it has with Leahy netting two shutouts in the pads and have his own teammates baffled in practice.

You have to give it up to this kid for thinking outside the box. You've had recently the comeback of the brown-colored pads for retro games and white pads for more illusion of a bigger net, but Leahy had upped the ante when it comes to design and execution. Bigger props to Darren Stomp who actually had to put the pads together. I'm sure that the time he had to put into this project was something that he had never seen before.

Now, the question is whether or not we'll see a professional goalie get onto this trend or if Leahy can break himself into the pro game and show off his original design to the world. Of course, since he patented it; he could be the only one to be able to use it for the time being. I didn't spend much time in law school, so I don't know how it works.

Again, props to Leahy and Stomp for the new look at the old goalie trade.
Posted by ScottyWazz at 7:11 PM