What Have We Learned: Winter Classic '09 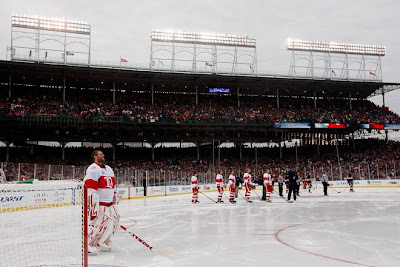 Now that the 2009 Edition of the Winter Classic is over, it's time to steal a bit from "Opie and Anthony" and play What Have We Learned.

-The Ice Was Right: NHL ice czar Dan Craig and his crew deserve all the credit they get and more. The ice they made on Wrigley Field was perfect for game and allowed a great flow to the game and allowed the players to make crisp passes and solid dekes as opposed to the ice from a year ago.

-More Doesn't Mean Better: Luckily, I was able to get both the NBC and CBC feeds for the game. While NBC had more angles and more cameras, the CBC's angles and camerawork was much better with the less cameras they had. The shots were tighter and more precise than what NBC presented. Sure, CBC has been doing this for years, but you'd think NBC would hire guys who knew how to deal with hockey games....or not.

-Field of Dreams: For all the doubt that a baseball field would work, by all accounts the sightlines were very solid regardless of your seats. Of course, sitting higher was probably better in this case, but still-- it wasn't as awful as some people may have thought.

-Ty's the Guy: If I'm a team, I'm looking to get Ty Conklin through free agency or a trade because that almost guarantees an outdoor game. This is Conklin's third start in an outdoor game and has the experience to deal with the elements.

-Tale After 20 Minutes: The Blackhawks took it to the Wings in the first period, but after that it was all Detroit. You have to wonder if the buzz in the first helped the Hawks get out to the 3-1 lead, but why couldn't they have held that intensity for the other 40 minutes that remained and that counted??

-Depth Kills: The Red Wings had 10 players with a point, three with multi-point games, and five goal-scorers. Marian Hossa, Jiri Hudler, and Henrik Zetterberg all had three points, while the Wings also got goals from unlikely sources like Brian Rafalski and Brett Lebda.

-Home Ice Disadvantage: No home team has won an outdoor game, but this edition was the first to not to be a one-goal game. You have to wonder if teams would not lobby to take in the outdoor game in fear of a loss, but would love it because of the extra revenue.

-Cheli's Swan Song??: Chris Chelios only played 1:57 and you have to wonder if this was it for him in terms of playing. His injuries this season have hampered him and this could be the best way to go out, playing in the Winter Classic in his hometown in a victory for his squad. His heart may be there, but the body may not have enough in the tank.

-Huet's Mr. Hyde: There's times he looked amazing, but Cristobal Huet's Jekyll and Hyde routine continues as he let up some soft goals and was bobbling the puck many times in the 43+ minutes he played in. However, without much help in front of him, the blame shouldn't be put too much on his shoulders.

Now, we await to see where the next venue will be for the Winter Classic in 2010 and if the trend of home teams losing continues and if Ty Conklin will get another outdoor start.
Posted by ScottyWazz at 2:25 PM