Why The Bolts Should Never Get Another First Overall Pick 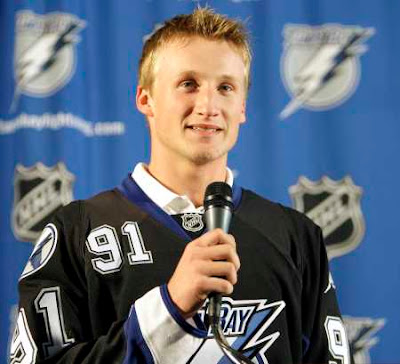 With the exception of their first draft where they got the first overall pick in Roman Hamrlik back in 1992, the cases of Vincent Lecavalier and Steve Stamkos should be more than enough to give the NHL reason to never allow the Tampa Bay Lightning have another first overall pick in the Entry Draft ever again. Albeit, the Bolts management probably didn't know how to put the media behind the Hamrlik move, or else they would have done it.

It's very apropos that the Barrie-Koules contingent put out the "Seen Stamkos??" campaign, because as of right now-- not many people have. With only four goals and 14 points including a -11 on the season after 39 games, it's definitely not something that the Bolts had in mind when he came into town and they put the money out. With all the hype they put out for him this summer, for all the buzz that the Bolts had out there for him-- his production has been less than stellar.

It oddly resembles the rookie year of the other first overall pick for the Bolts, Vincent Lecavalier, who had former owner Art Williams call him "the Michael Jordan of hockey", which resulted in Lecavalier putting up only 28 points in his first season and really didn't allow him to flourish too much until '02-'03 when he started to really find his niche.

The parallels are starting to really shine through with both Stamkos and Lecavalier, at least through the first year. They were propped up to be the biggest thing in the history of Tampa's hockey history. However, with all the pressure on each of them, with all the expectation-- the youngsters aren't able to excel. Even though it's not that much of a hockey hotbed, the pressure in a market like Tampa is very high because they are looked upon to bring a true face to the area. With all that on their shoulders to carry an entire market, of course they are going to crumble in the first parts of their career if they aren't pampered and nurtured to adapt to the NHL way of life-- both on and off the ice.

The gross mismanagement of both these young stars are proof that owners really should re-evaluate how they market some of their young stars. Granted, players like Sidney Crosby can be able to withstand something like that because they've been through it their entire life; yet guys like Lecavalier, Stamkos, and others who only get the attention at the end of their careers in juniors; they're not sure how to adjust to all the attention from going under the radar and being just a face in the crowd for so long. Yet, the owners only care about profit and if they can just, I guess exploit, their young stars-- they don't care the effect it has on the player until it affects their profit.

Oddly enough, both times that the Bolts had a first overall pick, they had relatively new owners to the team and to gain a little push for them-- they had to go beyond extreme when promoting the next big thing. Both times, the adverse effect happened and they did more harm than good.

These two players should be an example to all owners-- old and new-- be careful what you do with your young talent and and how you promote them. It's a hard enough transition as it is with guys making the jump from junior to the pros (though some make it look easier than others) without the weight of a franchise on their shoulders and having to carry the team and organization in their first year, normally at the age of 18. They have enough pressure on them as it is, they don't need added, unneeded pressure off the ice, as well.
Posted by ScottyWazz at 1:00 PM

I hope to god Tampa moves my goalie to a team I don't hate and that will work with him and is interested in developing him. Dustin Tokarski is just too great to waste away in some pit of suck of a team.