Face the Media or Face the Music 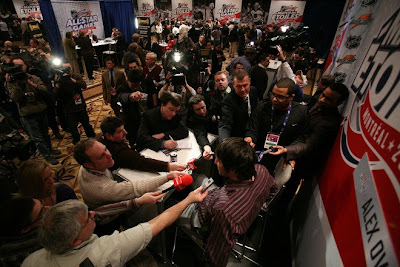 I think there's a lot of people who will consider the NHL All-Star Game as a farce, a glorified shinny game, and something that proves nothing to no one. I wouldn't disagree, that's for sure, but the whole ideal of the All-Star Game is to collect the NHL's greatest stars (fan voting aside) and have them in one place at one time for the fans to take in their demi-god status.

There seems to be an uproar about Gary Bettman and the NHL's decision to discipline the players who do not show up for the festivities. The lay of the land set out by Bettman is that a player would only be exempt if they missed the last game before the All-Star break or one game after it's done. Now, that doesn't mean they have to play-- they just need to show up, sign some autographs, wave, maybe take some pictures-- then they can take in the life of what it is to be in Montreal, which is what Sidney Crosby will do. However, for guys like Nicklas Lidstrom and Pavel Datsyuk, they will miss their first game back as healthy scratches, which I'm sure Red Wings fans are just very keen to hear.

Yet, at the same time-- it's a genius thing to do and really something that will keep the sponsorship money (which is $10M this year) rolling in and keep the top stars in one collective in one way, shape, or form. Sure, people can shell out for season tickets to see these players every one and a while-- however, especially in these tough economic times, this weekend is the one true way to see all the top players in one area at one time unless they somehow decide to have bar-b-que in the summer and sell off passes on eBay....which may not be a bad event, truth be told-- only if the Ice Girls are there in a swimsuits.

If the NHL wants to get more sponsorship money from their current sponsors, as well get more sponsors on board, they need to have all their stars there and not sitting at home resting. Sure, the players need to rest and baby some injuries, but what does it hurt to just show up for the other festivities out there?? They can still get their rest, get a free vacation out of it, and maybe munch on a hot dog or something. It's good for the game to have the player show up, though it'd be better if they played. A little face time can go a long way into promoting the game off the ice when they can't be on the ice.

James Mirtle has more in a much more eloquent way than my rambling ever could.
Posted by ScottyWazz at 6:32 PM