What Have We Learned: Skills Competition 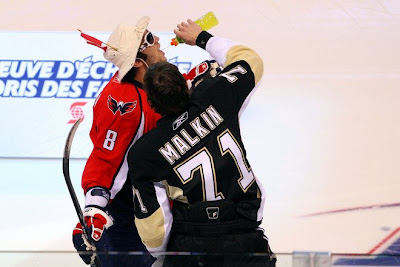 The most exciting part of the All-Star Weekend, the Skills Competition, was held tonight and I must say-- there was some good, some bad, some ugly; but it happened. Here's what we learned.

-Need for Speed: I honestly believe that Mike Gartner could have come out and won this event at 40+ years of age. Not to knock on the skaters in the event, but no one coming close to a sub-13 second time makes me wonder what the hell is going on.

-Breakaway Challenged: There was a lot of tricks put out, but it was very bland as a whole for this event. A lot of nice stickhandling moves by the participants, but it was the same thing over and over again. Luckily, Alex Ovechkin's flair helped save the whole deal with his tourist motif he put on with an assist to Evgeni Malkin.

-YoungStars Killer: I can understand allow a time for people to text in their vote for the Breakaway gimmick, but this game was like a pregnancy-- it was a flow killer. Leave this game to open the events and then go into the Skills Comp. Put the breakaway deal at the start and let the fans test their votes through the last event or something like that. Put a time limit on it. Do something, but don't ruin the flow of the Skills Comp.

-The Price is Wrong: It's only an exhibition, but Carey Price looked very shaky. I know he's been on the shelf, but you have to wonder what's this kid's confidence level is right now. We'll see what he can bring to the All-Star Game, but it may be time for Price to re-focus himself.

-Accuracy in Marketing: It wasn't so much how well Malkin did going 4-for-4 and 3-for-4 in OT, but how the NHL is selling sponsorship on anything. Gotta love the McDonald's accuracy plates.

-Skullet Unseat: Thanks to composite sticks and insane genetics, Zdeno Chara set a new Hardest Shot record with 105.4 MPH (169.62 KPH). It was nice to see that Chara was able to fashion a toque out of a bookmark, but if that's his crazy Slovakian style, more power to him.

-Elimination of Insomnia: Great idea, somewhat good execution, but boring as hell. At least this was something everyone was in on and gave them a chance to shine, which is what Shane Doan did in winning the whole thing. Maybe think of something different for next time and maybe get all six goalies in on it rather than just four.

All in all, it was a very dull skills competition in comparison to other years, at least what I can remember. I don't know why they don't give the goalies more events, but I guess the risk of injury is a little much for them, but still. They'll get lit up during tomorrow's game-- that's for sure, but that's the way this glorified shinny game is supposed to be like anyway. Pick the over in this game folks.
Posted by ScottyWazz at 7:45 PM

Email ThisBlogThis!Share to TwitterShare to FacebookShare to Pinterest
Labels: All-Star Game, Skills Competition, What Have We Learned

they need to start having two skaters go at once. that will give it more of a race feel and get the crowd into it.