Religion and the Rink 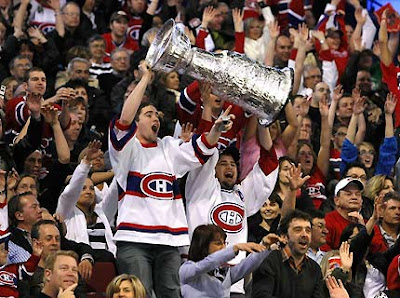 It seems that when I head to Montreal this June for the Entry Draft, I'll be heading into the Holy Land.....so says one Swiss-born professor at the Universite de Montreal. That's correct folks, it seems that, at least in one place, we've gotten to the point in Canada where at least one hockey club has been looked at as a religion.

It seems that there's a university course at Universite de Montreal exploring the ties between the Montreal Canadiens as an organized religion. The correlations of this and some forms of Christianity is fantastic, what, with the relics of jerseys, the nicknames of certain players of the teams' history. Now, if the Canadiens are that of Christianity, does that means the Maple Leafs are Judaism?? I mean, they're lost for 40+ years, different leaders still not taking them to the promised land, and the locust....wait, what??

Yet, this begs the question of whether or not this is a little bit over the line of fanaticism and onto the realm of craziness. Sure, the points made are valid ones that Montreal has a lot of history in hockey, both professional and amateur; but there's a point where you may want to hold back on the blasphemy that this could create. Yes, the people of Montreal (and beyond for that matter) who are infatuated with the Canadiens knows the history, remembers the players past and present, and are as devoted as any other team on the face of the Earth in any sport. That said-- would you consider it a religion or cult?? Granted, if it was a religion and Ken Dryden was giving the sermon, it'd be at least a two-and-a-half hour homily.

I guess it's really all in the eye of the beholder whether or not it is a religion or not. There's plenty of passion in Canadien fans, they seem to show up win or lose, and could be some of the smartest fans in the game today. Whether or not that constitutes holy standing or not, who knows-- but some would say they have a "holier than thou" attitude at times, but there are plenty of team fans out there who have that mantra, but don't have the history to back it all up.

Yet, where do we draw the line between sports and everything else in life?? Is the meaning of life sports?? I mean, there's drama, heartbreaks, pleasant surprises from underachievers, and overachievers brought down to Earth when they thought they were on the top of the world. It has all the makings of what makes life go around and it last in three to four hours bursts almost every night of the year. Huh....maybe it could be a religion within itself, weird....

Quite frankly, I'd love to see the course in action and see the syllabii that comes with this class. If only I could speak French, then I'm sure I'd not only understand what the professor was saying, but could definitely figure the linage of how the Habs could be tied deeper to a religion than a cult-form.
Posted by ScottyWazz at 2:13 PM