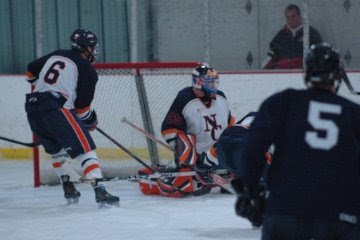 Crazy story out of Wisconsin, as Daniel McIntosh of Northland College broke an NCAA Division III record for save in a game with 95 saves in a 4-0 loss to Adrian College. How bad does one team have to be in order to let up 99 shots in a game; and how good is this McIntosh kid to stop that many shots in a game and only let up four??

The thing about this Northland team is that they are currently 1-17-0, with 25 goals for and 116 against, so they aren't that good. However, this game put in by McIntosh against the top team in the MCHA could get some buzz about this kid and may boost his standing in the scouts' eyes. Or, it could get some other schools interested in him and maybe try to lure him out of Northland and onto their roster via a transfer. It is definitely a great feat for this sophomore goalie and hats off to him for putting up with the barrage of shots.

This is probably the biggest headline news from Division III hockey since my old school, Neumann College, got destroy by RIT 24-0, breaking plenty of RIT's school records for most goals scored in a game and biggest goal differential.
Posted by ScottyWazz at 1:00 AM

I think he might get a look by some track coaches as well - that must have been one serious night of aerobic goaltending! Did the Zamboni have to clean both ends of the rink?

Nice to have found you - I have linked to this post over at my Goalie Blog inGoalMag.com
If you have any other goalie news let me know and I'll link.