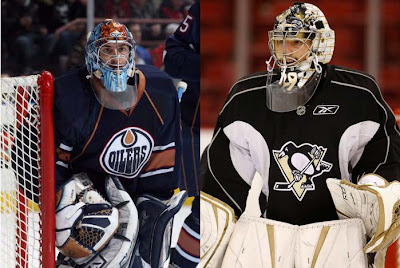 One trade freed up some goaltending controversy for one team, but could have created another one for the recipient. The Edmonton Oilers traded away Mathieu Garon to the Pittsburgh Penguins for Dany Sabourin, Ryan Stone, and the Penguins 4th Round pick in 2011. The Oilers get rid of their logjam in net, as GM Steve Tambellini has said the Oilers won't being Sabourin to Edmonton, either trading him again or sending him to Springfield in the AHL.

This of course leaves the Oilers with Dwayne Roloson and Jeff Drouin-Deslauriers as the tandem in Oil Country, which may not be the most desireable for Oilers' fans, but it is what it is. However, does this create a goaltending controversy in Pittsburgh?? You have two #1 quality goalies on the roster, one who has been injured a decent amount this season and seen his share of struggles and the other being slighted by his former team and now traded to Pittsburgh.

Now, albeit after this season, Garon is a free agent, but if he outplays M-A Fleury or Fleury crumbles under the pressure of having to save his job, could Garon play his way into an extension with the Penguins or Fleury play his way out of town?? Fleury is signed through the 2014-15 season, but if he continues to underachieve; could that term be short lived?? The Pens are showing that Fleury needs to kick it into gear and become the goalie that got them to the Cup Finals or else have a guy like Garon take the spotlight and take the job, which could be the last straw for Fleury's tenure in Pittsburgh.

Depending on what happens this season, what would Penguins fans like to see come from this situation?? If Fleury falters, could they actually stand six more seasons of underachieving from Fleury and having to worry about if the back-up is good enough to cover his ass in those times of Fleury's short-comings. But how the might have fallen, with Fleury being deemed the savior in net for the Pens, now being second-guessed because of his play....or lack there of.

If there wasn't enough to watch in Pittsburgh as it is, we have this subplot of what will happen between the pipes for the rest of the season and what will happen into the off-season to worry about as well.
Posted by ScottyWazz at 6:05 PM