The Captain, The Contract, and The Circus 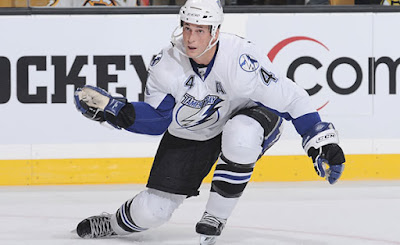 This is the best thing about Lightning-- there's never a dull moment or a dry story.

According to TSN's Darren Dreger, there's a rift amongst those in the Bolts front office whether or not to keep Vincent Lecavalier in the Tampa Bay Lightning uniform. The captain of the team, tied for the team lead in goals, the franchise-- the brass doesn't know whether or not they want to keep him. I don't understand why this discussion is taking place. It's not a sane decision-- but again this is Tampa.

The thing that's going to get me-- is there a team out there willing to take on the new $85M extension he just signed this past summer and give up what could total the family farm for Lecavalier?? Sure, he's an extraordinare talent and probably worth every penny and prospect/player a team is going to give up. One team named is the Montreal Canadiens, which of course with every Francophone player out there is always the case.

But why would the Bolts want to trade their guy, a guy they wanted to lock-up for so long, for something that's probably not going to be a sure thing?? Especially when your team is just trying to find some kind of relavance in the NHL, aside from the sideshow that this ownership has made this organization. If the Bolts deal Lecavalier, regardless of what they get in return-- you may as well move the team to Kansas City or Hamilton, because they've given up all hope of succeeding anymore in Tampa.

Plus, aside from the contract length and cash involved-- which is their own stupid action to begin with if that is in fact the case-- why has Lecavalier fallen out of favor with the team?? It's not like there are many weapons for him to work off of or to help pick the team up if he and Martin St. Louis were to go into a slump; why deal a big gun when you're already hurting to score goals (28th in the NHL in goals for)?? Also, this is after the Bolts told Lecavalier's agent there is no desire to trade him.

Regardless of the outcome of this, at the end of the day-- you just have to shake your head and say, "It's Tampa, what do you expect??"
Posted by ScottyWazz at 9:32 AM