Avery Is Ready To Return, But Is The NHL Ready?? 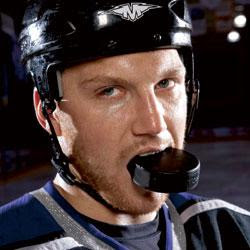 By all accounts, Sean Avery will be cleared of his sabbatical in the NHL/PA Behavioral Modification Brainwashing Seminar soon, thus will begin his long haul back to the NHL. As Darren Dreger mentioned in his article about this, Avery is still a member of the Stars and it's their decision to find on of their 103 AHL affiliates that will take Avery on their roster once he's ready to play again, send him down there and maybe bring him back on re-entry waivers to hope he gets pluck off there from some team.

It's obvious that the Stars don't want him. They're 16-7-3 without him and they are on the verge of getting in the playoffs after they were written off in November. That alone could show what kind of guy he is, when he leaves the team finally starts to get better and play like they have a purpose in life. That could be a deterant right there.

The big factor in this is whether or not there's an AHL affiliate of the Stars that would be willing to take Avery to give the Stars a chance to get him off their hands. The Manitoba Moose already said they wouldn't be willing to take him onto the roster at all. That leaves five affiliates that may or may not be willing to expose their young players to a personality like Avery's. This is one of the big reasons why NHL teams need to have a primary affiliate so that, not only do the players who are on the bubble of the main roster and AHL rosters know where they're going all the time, but also that if you have a troubled player-- you tuck him down there to straighten him out.

Albeit, it's hard to judge Avery, not knowing what this program has done for him-- whether it has either changed him for the better or if he remains to be the same old Avery with more reasons to be pissed off because the doctors and workers there are idiots. So, the questions remains-- is there a NHL team out there who would take him off the Stars' hands??

Some people have speculated that the Rangers would be the top pick since Tom Renney was able to control him somewhat last season and because it was New York and he would have a lot of things to do there to keep him occupied. However, this late into the season, the chemistry is already set in stone and some teams will be more than hesistant to put someone like Avery, who has a checkered past to put it nicely, on their team-- no matter what the reward could be from the risk that is taken. Sure, it's unfair to an extent, but until Avery shows that he has actually changed for the better, there's going to be little interest in wanting to take him onto the roster. Though that make the circle vicious since he can't show people he has changed if no one wants to put him on a roster, AHL or otherwise. So that again puts Avery at a disadvantage of that.

It'll be a very slippery slope for Avery to climb up to get back to the limelight of the NHL and there's going to be an added obstacle with everyone having his eyes on him looking for one more imperfection to give them reason to not take him onto their roster. I personally think Avery is great at his role as an agitator and instigator, but are other teams going to look past what he's done and see what he's capable of doing, if he in fact has gotten his behavior in check or will the history of him being a nuisance in the lockerroom and in the media make teams very skeptical of how he could actually benefit the team in the long-run??

According to both Larry Brooks and Steve Zipay, who cover the Rangers for The New York Post and Newsday, respectively, the Rangers are interested in bringing back Avery.

I have just one word for that: NO!