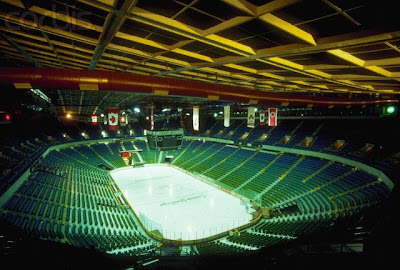 A friend of mine back in DC is very upset that she's not able to get a ticket to a Caps game anymore because the team has become so popular. She's gone as far as saying she's done with hockey as a whole because of the bandwagoners and people who don't know all that much about hockey swapping up the tickets in lieu of fans who have been there the entire time supporting the team in their darkest days.

While I can understand her pain, it brought about the conundrum of whether a fan would like to see the team succeed and be financially stable while avoiding rumors of a possible move in the midst of not being able to get a seat or would a fan rather be able to get a ticket to a game whenever they wanted, but have to deal with the thought the team may not be in that building next season??

I think it's quite the thought provoking ideology, especially when it was brought up about that the people who buy the tickets know nothing of the sport and are of the "puck bunny" variety, as well as the "pretty boy" mentality that the Caps and hockey in general has brought about in one way or another. I mean, it's hard to argue that the NHL has started to become a filter with some "pretty boys" who could possibly be doing some work for the Gap or some other clothing company-- but you can't blame them-- it's genetics. If they couldn't play the game and all they did was look stylish; I could understand why the rage would happen-- but some of these pretty boys can play. But the thought of people buying up tickets that know nothing of the game is very enraging to some, which brings about the question that has been posed prior.

Hockey is a sport that is a niche in the States, at best-- fans should know it and accept it for what it is. If you're going to rely on the die-hards in any city, you'd be back down to the six Canadian teams and maybe 10 US teams. The bandwagon fans are the ones who help carry some of these ticket splurges and if a team is winning and is the talk of the market, of course people are going to go be part of the fad. Who knows-- if they go enough and learn enough; they'd soon become die-hards and thus the experiment worked when the team isn't the flavor of the month. Especially in a place like DC, they have the perfect storm for bandwagoners-- the only game in town winning, arguably the top player to watch in the NHL, and they're winning at a solid pace, especially at home. When you're the only game in town worth watching-- you're going to have people wanting a piece.

Conversely, if you have a team like Atlanta, Nashville, or Long Island who are in trouble financially and where you really couldn't get rid of tickets fast enough-- are the die-hards enough to keep the team in town if another owner or city came calling?? With the teams doing horrificially as they seem to be doing-- even some of the die-hards are throwing up their hands and wondering where the support for the team is coming from and how they keep staying in the city for the long run.

Bandwagoners are a necessary evil in any sport, but especially hockey-- where exposure in the US is always wanted and always needed. If you have a team that's winning, has a lot of marketable players, and a staff in the front office willing to get the team's name and players out there as much as possible-- the bandwagoners will come and will enjoy their experience there. The bottom line is that if the building is full-- it doesn't matter who's in the seats; money will be made to keep the stability of the franchise alive.

So, as much as it's a bitch not to get a ticket because people have beat you to the draw, it's probably the best for the long run....and let's be honest, it's easier to watch the game at home, drinking all the beer you want, and not having to deal with a long trip home because you're already there. Plus, if it gets bad-- you can flip the channel to some kind of crap.
Posted by ScottyWazz at 8:35 PM

Nice work Scotty. I don't like the fact that it's so hard to find tickets to Caps games, but I think that's awesome.