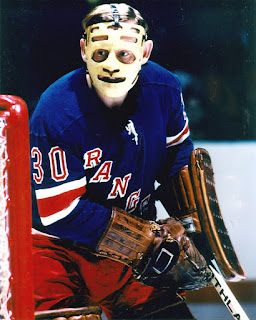 This past weekend was the Kentucky Derby and this is a tie-in to that...sort of. While you could define this goalie as a work horse, he also was able to have a passion for the stables, as well as between the pipes. This week, the profile of Gilles Villemure.

Villemure started of with the Quebec Junior League's Trois-Rivieres Reds in the 1958-59 season, while also going to the International League's Troy Bruins for three games, registering a 2-1-0 record. In the 1959-60 season, Villemure moved to the Ontario Hockey Association with the Guelph Biltmores, playing in 35 games there, but no record given for that year.

Moving onto the pro ranks in the 1960-61 season, Villemure would go to the Eastern League and play for the New York Rovers. With the Rovers, Villemure played in 51 games and posted a 16-34-1 record. During the 1961-62 season in the EHL, Villemure played for the Long Island Ducks and put up a 25-39-1 record in 65 games, as well as being loaned out for one game for each the Charlotte Checkers (loss) and Johnstown Jets (win).

In the 1962-63 season, Villemure would land with the Western League's Vancouver Canucks, playing in 70 games and posting a 35-31-4 record, then 3-4 in the playoffs, a season where Villemure was WHL Rookie of the Year. Villemure would go to the AHL with the Baltimore Clippers in the 1963-64 season, playing in 66 games and finishing with a 31-33-2 record while being called up to the NHL for a five-game stint with the New York Rangers, going 0-2-3 in that span.

A move back to Baltimore and the AHL for Villemure in the 1966-67 season, playing in 70 games and posting up a 34-27-9 record and going 4-5 in the playoffs. During the 1967-68 season, Villemure stayed mostly in the AHL, but with the Buffalo Bisons; going 18-13-6 in 37 games. That season, Villemure played four games for the Rangers, going 1-2-0. Back with the Bisons in the 1968-69 season, Villemure had a remarkable 36-12-14, though a 2-4 playoff record didn't help-- but it would allow Villemure to win the Les Cunningham Trophy for AHL MVP and Hap Holmes Trophy for fewest goals against. Doing it again in the 1969-70 season, Villemure won the Cunningham and Holmes Trophy (no record given for his 65 games played), as well as going 11-4 in the playoffs to help the Bisons win the Calder Cup.

The Rangers finally gave Villemure a chance in the 1970-71 season, splitting his duty with Eddie Giacomin. Playing in 34 games that year, Villemure went 22-8-4-- helping himself and Giacomin win the Vezina Trophy that season. During the 1971-72 season, Villemure played in 37 games and posted a 24-7-4 record and then went 4-2 in the playoffs; while the 1972-73 season brought a 20-12-2 record in only 34 games for Villemure, but it would account for his third straight season playing in the All-Star Game. A drastic drop for Villemure in the 1973-74 season, playing in only 21 games and posted a 7-7-3 record, while his workload increased in the 1974-75 season, playing in 45 games and finishing with a 22-14-6 record.

Villemure admittedly lived his dream of playing in the NHL and was also able to partake in his other passions of horse racing. While he could have had a better fate by sticking around with the Rangers, the success he had on Broadway and in the minor leagues helped him become one of the more recognized "absurd" names.
Posted by ScottyWazz at 8:00 AM