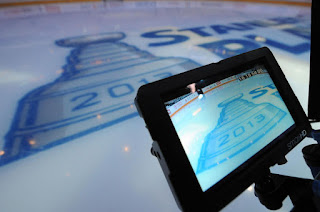 Only got three right in the first round, which shows-- I know nothing. But I'll try again.

(1) Pittsburgh Penguins vs. (7) Ottawa Senators
Prediction: Senators in 7
Reason: The Senators are healthy, rested, and handled their first round match-up somewhat easily. The Penguins barely survived the Islanders and goaltending is in doubt.

(4) Boston Bruins vs. (6) New York Rangers
Prediction: Rangers in 6
Reason: Henrik Lundqvist is on point and the Rangers are a shot blocking sensation. While the Bruins are carrying high emotions, they are beatable.

(1) Chicago Blackhawks vs. (7) Detroit Red Wings
Prediction: Blackhawks in 6
Reason: This last match-up of Norris Division rivals in the Conference should be a doozy, but the Hawks are a top team and the Red Wings could be easy prey for them.

(5) Los Angeles Kings vs. (6) San Jose Sharks
Prediction: Kings in 7
Reason: Both teams are hot and this could be the best match-up we see out there, but the Kings are out on a mission and the Sharks could very well be too rested for this Battle of California.
Posted by ScottyWazz at 8:18 AM