Thanks For Coming Out, 2013 Vancouver Canucks 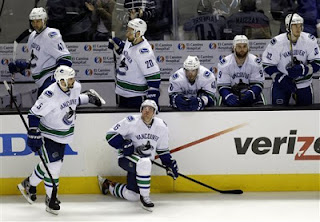 Well, that was quick and unexpected. The Vancouver Canucks are the first team to shake hands in defeat as they were swept by the San Jose Sharks in one of the many controversial calls made in the playoffs, which would sink them in overtime in Game Four.

Obviously, the elephant in the room until next season is going to be what to do with the goaltenders, mainly Roberto Luongo. Is there a team that will actually take a chance and trade for him or will they leave the Canucks out on the lurch in order to force their hand to buy them out?? Will they even consider putting Cory Schneider out there for a bigger return?? The quicker and more effecient the Canucks take care of that,  the better they do moving forward to filling out the other parts of their line-up.

Picking Luongo as the obvious choice to move, what can you do with the money freed up there?? Currently, the Canucks are over their cap limit for next season by $100,00 and have 17 players under contract. If they do trade someone, they need to do it for less payroll coming back and more bodies. You can imagine that Chris Tanev and maybe Mason Raymond get re-signed, then you'll have to find a way to move some parts around in order to get under the cap and get the full roster out there.

Another point of contention is probably to get some support for the Sedins. While Daniel and Henrik are the offense for the Canucks, the secondary scoring is quite scarce. Jannik Hansen could be a guy to pick up the slack, but how long can he be consistent?? Alex Burrows will most likely be called upon to bump up his production with his new contract, same going for Chris Higgins. Yet, you get Ryan Kesler for a full season and he can be the difference maker for that second line scoring.

While many of the Canucks faithful will scratch their heads over the quick elimination, the off-season could be just as dramatic with many unknowns and plenty of silliness to come through it. There won't be any dull moments from the front office and maybe the team on the bench and behind the bench will be just a touch different from this year's team.
Posted by ScottyWazz at 8:01 AM

Email ThisBlogThis!Share to TwitterShare to FacebookShare to Pinterest
Labels: NHL Playoffs, Thanks For Coming Out, Vancouver Canucks