Thanks For Coming Out, 2013 New York Rangers 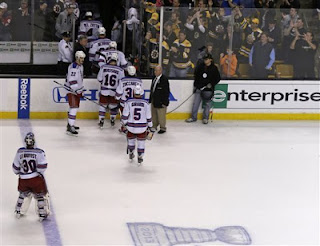 From a top acquisition during the summer to a power play that went flat, the Rangers had the ups and downs this season, which a couple surprises coming through the way. Yet, even with one of the top goalies in the NHL today-- the Rangers fell short of their quest for the Cup.

Among the Rangers faithful, the big question is whether or not John Tortorella will be back next season. There are some decisions and personnel decision made that many fans didn't like. It remains to be seen if Glen Sather feels the same way the fans do-- which should come down sooner rather than later with the amount of coaching out there for the picking as it is. While the benching of Brad Richards in playoffs could be his last move, Tortorella brought a solid game plan for the Rangers.

As far as the summer move of acquiring Rick Nash from the Columbus Blue Jackets, it seemed to pay off instantly. Nash had a 20-goal and 42-point season in 44 games, which are solid numbers for an oft-injured player and someone coming from a team that was in a bit of peril in Columbus. More over, Nash may have awaken the offense of Derek Stepan, who was on pace for a career season in goals and points, as he was only three off the pace in goals and six off the pace in points for a shortened season. This is the combo that could take the Rangers in the right direction.

Henrik Lundqvist was another solid constant for the Rangers and it's not a surprise. It's just a shock that he can never be that "hot" goaltender to help lead the Rangers. He was almost that last season, but the Devils got in their way. If Lundqvist was able to get more support, however, that's what could fuel him. With the Rangers relying on Lundqvist so much, it is a bit wearing and gives little leeway for King Henrik to make a mistake.

And the defense is a major part in the Rangers playoff plan, mostly with their shot-blocking. While Ryan McDonagh did provide a lot of the defensive side, the lack of Marc Staal in the line-up may have hurt the Rangers in the second round series. Staal will be coming back and will probably produce just in the same way he is, as I don't think he will shy away much from dirty stuff in front of his own net.

There's always a hope of the Rangers when it comes to the season, but falling short could cost them a coach, which may screw up the entire progress they had built up in the past couple of seasons. However, with the core still being in tact for next season, that same mentality should be there and they shouldn't be lead too far astray. Broadway should be solid for next year's Rangers and if they can get a little more offensive in the playoffs, it could do them a world of good.
Posted by ScottyWazz at 10:35 AM

Email ThisBlogThis!Share to TwitterShare to FacebookShare to Pinterest
Labels: New York Rangers, NHL Playoffs, Thanks For Coming Out