Long-Layoff in a Short Season 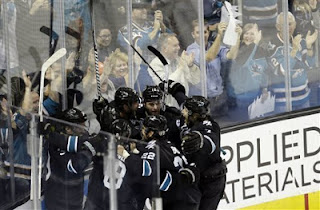 In most cases, teams may dread a long layoff in the playoffs. It's too much time between series for them to get rusty to the game action and for them to lose an important game to start, which could kill their hot streak. Yet, in a truncated season like this-- it could actually go on to help the San Jose Sharks.

The grind of a short season is something that affected all the teams, most of which had to have a playoff mentality through the midway point of the short season to make it to the playoffs. For the Sharks, this would also help in the healing of players like Martin Havlat, Tommy Wingels, Jason Demers, and Adam Burish, who heal up from their wounds from Round One. Luckily for the Sharks is that they ranked 21st in Man Games Lost (249), which should just allow a small breather for players like Patrick Marleau, Joe Thornton, Antti Niemi, and Joe Pavelski.

But can the momentum be regained quickly?? With the hot hands of Pavelski and Logan Couture; the thought that if they don't get out there sooner rather than later would lose the magic touch is out there, regardless of the grind they went through during the season. Also, with the Sharks as a 6-seed, they'll start on the road unless Red Wings and Wild pull of upsets. The lack of home-ice advantage would be rough in order to shake the rust off for a long-layoff, but at least knowing their destination ahead of time will leave great time for them to travel to either Chicago or Anaheim.

Throwing to the comparison of the 1995 Playoffs; the Devils, Flyers, and Red Wings won their first round match-ups in five games; their second round match-ups had the Flyers and Wings sweep with the Devils winning in five; then the Devils over the Flyers in six, with the Wings beating the Blackhawks in five, then the Devils sweeping the Wings. All the early movers in the first rounds used the rest to their advantage, and maybe the Sharks can draw off of that tidbit of short-seasons past.

Whether or not the rust will be there for a minute, a period, or a game-- the Sharks do have some time to actually breathe and rest up and regroup-- as they luckily didn't get hurt by losing three of their last four regular season games, they just need to not get too rested or else they could get caught in the first couple games against their opponent who may have weaker legs, but more recent game-play experience.
Posted by ScottyWazz at 7:00 AM