A Look at the NHL Trophy Baron 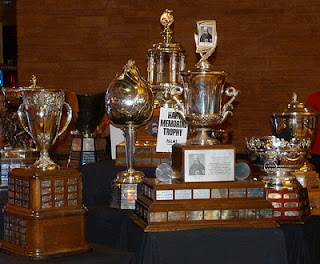 We all know about Phil Pritchard, the Keeper of the Cup. He's the guy who follows around the Cup wherever it goes, keeping a keen eye to make sure that nothing drastic happens to it. Whether it's photos ops of him strapping the Cup into a seat on an airplane or calling Peggy in order to actually get a seat-- Pritchard is a legend himself for being the secret service for the Stanley Cup.

However, what about the other trophies the NHL has-- who looks after them?? You're in luck, as in a TSOoA exclusive*, I got a one-on-one with the other Keeper of the Trophies-- Travis Uriac.

"Sure, Phil gets to go out and have all the fun with one trophy-- but think of what he could do with the rest of this silver hardware??" Uriac stated while he was in the corridor of the Hall of Fame's Esso Great Hall. "I feel a little more valuable than this guy. Granted, he actually gets to go around with the players, but who has to get his mail when he's gone, ya know??"

Uriac started with the Hall of Fame when he saw a listing on their website. They were looking for someone to overlook the Great Hall and he took it upon himself to be considered the keeper of the other trophies. While he's not officially that guy, the Hall of Fame really didn't have the heart to tell him that wasn't his primary function.

Notwithstanding, Uriac takes his job seriously. He looks after the trophies most every day and even accompanies them for the annual NHL Awards. That's when he feels that he has reached the peak.

"Look, it's not traveling all over the world, but I feel my job is the same scale. I have to make sure the guys don't do something crazy with them, make sure they to the venue in one piece, all that crap. Have you ever try to put a seatbelt on the Richard Trophy?? It's a pain in the ass." Uriac laments.

The travel within itself was something that has really hamstrung Uriac's life. At times, he has to look after at least five trophies that travel to certain events outside the Awards show-- like the All-Star Game and the Draft.

"It's cute that Phil has those photo ops with the Cup in First Class, but they don't see Rows 30 and 31 where I have to make sure all that silver is safe. It annoys the hell out of the flight attendants, especially when I have to bust out the silver polish for them. So what if the oxygen masks coming down, at least they're working-- I've got a job to do. So much easier to buy them a seat than it would be to check those trunks. These things aren't light-- and with the excess baggage fee and all that junk-- it's a headache....like when I use the polish in enclosed areas."

At least, with all those trophies, Uriac has to have some great stories of interaction with players.

"No, not at all," Uriac said looking at his feet. "They don't usually let me go with the players, but I tried a couple times. First was with the Calder-- Keeper of the Calder I called myself, and it was Patrick Kane back in '07. Honestly, I don't remember much of that, but we couldn't find the trophy for a few days after the the ceremony...and I'm not allow back at the Buffalo Zoo anymore either."

"There was a happening back in '11 when I decided that I should look after the Vezina Trophy. I called myself the 'Vezina 'Visor' trying to make something of that. But, apparently, no one told (Tim) Thomas. When I showed up to his house to take him the trophy and look after it; there were some awkward times just staring at him and then making sure the trophy was safe . Let's just say it ended when he called me 'big brother' and almost threw me out the door, but luckily I got out of his grasp."

As it stands now, the players-- as they usually do-- take a photo op with the trophies at the Awards show and then get some sort of replica of it later on. Uriac feels that doesn't have the intimate feel that he would like the other trophies to get from all the players. It won't stop him from keeping up with his passion, however. He still looks over the trophies in the Great Hall and make sure that people look at them, but don't do anything too rash for his liking.

"They're my kids, I wouldn't want strangers to completely go crazy with them. They can take a look, take some pictures...at times have me take the picture for them...but you know, it's something that makes people smile and creates some memories. But, with the memories, I don't want them to taint the history they have by smudging fingerprints around the cases. It's a labor of love."

It's definitely a labor of love, as Uriac didn't actually tell us what the Hall of Fame is paying him and they have not returned my emails when it came to what they thought about Uriac's job and how they feel when it comes to his sometimes over-protection of the trophies. Though one worker of the Hall of Fame who chose to remain anonymous, said that Uriac is just a support player for the Hall of Fame and is very low on the seniority totem when it comes to actually taking care of the trophies, which is why he was suspended for a time for the 2011 incident.

Uriac has taken his lumps, but continues to forge on looking after the trophies. He has done his best in order to make sure that people are able to enjoy them and that the players who win them look after them and add to the legacy of the trophy. Some may say he has gone mad with the passion he has shown towards them, but at the same time-- to have that kind of passion for any job is quite admirable regardless of how over-the-top it may seem to the outsider.

"Phil might get the glory, the face time, all the cult following like he does-- I mean, have you seen his Twitter?? Have you seen my Twitter?? Me either, they didn't even give me one. I don't know how this works. Has something to do with phones or something, I don't know. All I know is that he gets all this and loves it, but most of us don't need to be out in front and take the accolades in order to be content with their life."

*This is obviously a parody. As far as I know, there's not one person who actually looks after the trophies outside of the staff at the Hockey Hall of Fame. It would be interesting if they assigned one person to actually travel around with them, but it's not a team thing like the Stanley Cup is. Having a guy in the award-winners house and making sure it stayed safe is pretty insane and creepy.
Posted by ScottyWazz at 10:45 AM