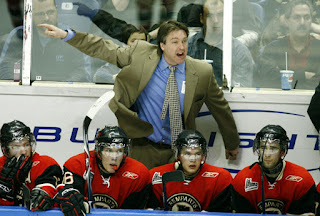 The addition of Patrick Roy to the new look Colorado Avalanche front office just adds to the glory days look that started with Joe Sakic getting upgraded to a new position. Who knows how Peter Forsberg or Adam Foote fit into it, but you can be assured that if there was a spot and they were interested-- it'd happen. But does it really mean all the things will change and start going the Avalanche's way??

So long as Greg Sherman is there-- no, it won't. While they do look good with the old time names they brought back, Sherman's decision making is still going to be there and could really hamstring the team when all is said and done. Of course, the fact that he could be getting pushed out with all these moves may change the way he goes about free agency; but rest assured that if there's a hiccup, Sherman will be the next one to go as there's no one else to place the blame on in the old regime.

Sherman aside, Roy is going to be getting the Avs the press they have lacked in the past few years. Sure, the last time we saw Roy behind the bench in the NHL; he was traded to Colorado a few days later, but it helped the Avs become who they are. A big question is whether or not he'll be able to bring his success in the Major Junior ranks to the NHL stage. Of course, the team's age is perfect for his transition with the youth already on the roster and either Seth Jones, Nathan MacKinnion, or Jonathan Drouin being plugged into the line-up next year.

Considering what both Brent Sutter and Dale Hunter have done with their transition from Major Juniors to NHL, Roy shouldn't have too much of a problem. A lot of his peers, including Foote and Hunter, have said that Roy's pedigree should allow him to do well in the NHL, regardless of the past incidents he has had behind the bench and in the media. That kind of passion will probably be more harshly criticized than it would be in the QMJHL, yet I don't think getting handcuffed is what Roy or the Avs would want to happen for it to all work out.

Not all reunions work out as they are supposed to. There are times where it falls flat and then it makes people wonder why it happened at all. Roy has been rumored to be the next guy to move to the NHL for a couple years, mostly linked to the Montreal Canadiens, and if he's as good as the anticipation-- he's going to provide the Avalanche with the boost they have needed since he and Sakic have left.
Posted by ScottyWazz at 12:56 AM