On the Topic Of the Colorado Avalanche 1st Overall Pick 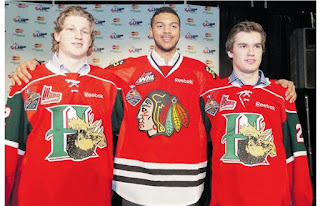 There's something to be said about the top three prospects in the NHL Draft all playing in the 2013 Memorial Cup Finals, which lead to the Halifax Mooseheads beating the Portland Winterhawks 6-4. Nathan MacKinnon had a hat-trick and two assists, Jonathan Drouin with five assists, and Seth Jones with only a goal to show.

With the joy of Twitter, it made people wonder whether or not the Colorado Avalanche will shy away from what they need most in Seth Jones's defense prowess for Nathan MacKinnon's scoring touch or even Jonathan Drouin's passing ability. Yet, if the Avalanche don't go for Jones-- then maybe they really should look at another rebuild of their front office after a couple of seasons because of it.

There is no denying that MacKinnon and Drouin are going to be studs wherever they land and it looks like it'll be Florida for MacKinnon and Tampa Bay for Drouin. However, when you look at the Draft, it should be more about necessity rather than desire of player to get. Jones is the player that the Avalanche need. They have little to nothing on defense now and they have a stockpile of forwards already. While Adrian Dater of the Denver Post is playing the "Who do you pick??" game with the stats on one game, the broader scope of things should have all signs point to Jones.

Though, with the changes that the Avalanche have made this off-season, bringing back a lot of former legends to make this team a force again-- there's always that off chance that the Avs would go for someone who's much more explosive and will garner a lot more attention than a solid defenseman like Jones. Scoring will always get people talking rather than a solid two-way game, which could sway the Avalanche's thoughts.

Even with all of that-- if the Avalanche don't pick Seth Jones with the #1 Overall Pick, they better make the playoff with MacKinnon in the first year or else they will be kicking themselves for not going with a defensive prospect who wants to play there and who could actually be the keystone to fix their defense.

Colorado will not outscore many teams, so while getting pucks in the net is great in theory-- they'd also have to find a way to keep them out, too. For a team who has let up an average of three goals a game in the past three seasons; it should be clear that the Avalanche need to get someone on that blue line to help out Semyon Varlamov keep the shooters at bay and maybe support in their own end a little bit.

Neither Jones or MacKinnon or Drouin will be the quick fix for the Avalanche. They are long-term project players who will be able to be an asset in time-- some quicker than others. However, if you need defense on your roster and you have a defenseman who is highly touted on the board-- why would you choose otherwise?? Sure, the one-on-one was a bit lopsided, but one game over an eight-month season does not a prospect's worth make.
Posted by ScottyWazz at 8:54 PM