Pointless Playoff Prognostication: Round One 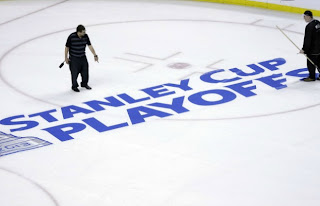 Everyone else is doing this, so why can't I?? Don't worry-- this will be quick and dirty.

(1) Pittsburgh Penguins vs. (8) New York Islanders
Prediction: Penguins in 5
Reason: Even without Sidney Crosby, the Pens are too deep to allow the Islanders to play the spoiler for their season.

(2) Montreal Canadiens vs. (7) Ottawa Senators
Prediction: Canadiens in 6
Reason: Despite the slipping towards the end, the Habs should be able to wear down the Sens, despite them trying to put up a good fight.

(3) Washington Capitals vs. (6) New York Rangers
Prediction: Capitals in 6
Reason: Third straight odd-numbered year these two teams will face in the first round and the Caps have won both. With their new confidence, they'll find a way past King Henrik.

(4) Boston Bruins vs. (5) Toronto Maple Leafs
Prediction: Bruins in 6
Reason: As much of a great story as the Leafs have been, the Bruins will turn up their playoff expertise in order to get past the first round.

(1) Chicago Blackhawks vs. (8) Minnesota Wild
Prediction: Blackhawks in 5
Reason: With a big season and resting their players during the last game, the team who has been great all season should have a solid first round pairing.

(2) Anaheim Ducks vs. (7) Detroit Red Wings
Prediction: Ducks in 6
Reason: With the Red Wings barely getting in, the Ducks should be able to pluck off an already tired team and get their offense rolling well.

(3) Vancouver Canucks vs. (6) San Jose Sharks
Prediction: Canucks in 6
Reason: Trying to exercise the demons of last playoffs, the Canucks will need to prove early and often they are a team on a mission.

(4) St. Louis Blues vs. (5) Los Angeles Kings
Prediction: Blues in 7
Reason: Brian Elliott has been on a roll this season and hot goaltending is the name of the playoff game. Plus, they feel to avenge last year's loss to the eventual Cup champs.
Posted by ScottyWazz at 8:25 AM