To Stay Or Gaudreau 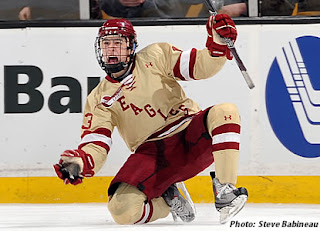 "It may be the right decision, but he's not doing it for the right reasons."

That was the parting comment from Dan "Boomer" Molberg when it came to the discussion about whether or not it is right that Boston College forward, Hobey Baker Finalist, and Flames draft pick John Gaudreau is sticking around Boston College for another season rather than signing with the Flames and moving along his professional career.

While that comment pretty much sums up the discussion, the fact former Flames defenseman and morning show co-host Rhett Warrener claimed that Gaudreau was "scared" to come out of college to play for the Flames is what took people a little off-guard. Warrener's points of him not going to get much bigger than his listed 5'6, 141lbs. frame, as well as having the best chance right now for making the Flames roster and getting top-six minutes are very valid; the fact he used "scared" right off the back when the talk came up is what maybe made him come off a little too harsh.

Third co-host Andrew Walker was trying to defend the decision saying that Gaudreau may not be ready-- his comment was brushed back by Boomer and Warrener saying he had nothing more to achieve in college, considering he has a National Championship, was the leading scorer, won the Beanpot, and could win the Hobey. Walker tried to draw comparisons to other small BC alum like Nathan Gerbe and Brian Gionta waiting another year, but Boomer and Warrener brought up he may just want to stay because his brother was coming onto the squad next season as well.

Most certainly, the points that Boomer and Warrener were making are very solid and correct, the term "scared" being thrown out there without prior knowledge to what his clear mindset is for staying at BC is a little heavy-handed. It's something that could actually be a better decision if he doesn't think he can cut the workload for the NHL schedule and the competition that comes with it, especially with his size. Staying in school and actually getting a degree could be a better fit in Gaudreau's mindset rather then playing in the NHL.

Notwithstanding the reasoning, it could be a bit alarming for the Flames' brass to hear about this decision being made. Gaudreau has already done all he could with his college career and him balking at taking the next step in a full rebuild where he could learn on the fly and adapt to the NHL game without really hurting the team's fortunes could be the best route for him to grow as a player on the job. As he is considered one of the Flames top guys coming up the pipe, it's not something you want to hear for a guy who has done it all as an amateur.

Despite that, to assume that a player is feeling one thing or another without having an inside track about it is something that's not really journalistically responsible. Even if it came from a former player who may have his own values in his head on how ready a guy may be; doesn't mean he's "scared." Of course, if Gaudreau's not ready to take the next step even with all his accomplishments and maybe all the confidence in his abilities, that should throw up some warning signals about what may happen with his NHL career when he actually gets there.
Posted by ScottyWazz at 8:36 PM