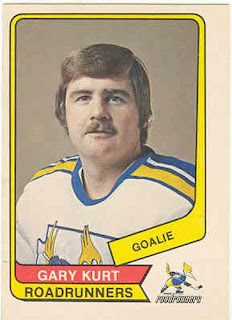 While the average goalie in the NHL seems to be getting bigger and bigger-- this week's AGM is probably one of the first "big men" between the pipes. Standing a 6'3 and 205lbs. right-handed catch goalie, he fooled many a shooter due to his reach, "backwards" gloves, and filling the net; but thanks to happenstance beyond his control-- he never could make a mark in the NHL, but luckily-- there was an alternative. This week, the profile of Gary Kurt.

Moving onto the AHL in the 1969-70 season, Kurt landed with the Cleveland Barons; appearing in 40 games the first season (no record) and then 42 in the 1970-71, where Kurt would finish with a 24-12-3 record, then going 4-3 in seven playoff appearances. That performance garnered Kurt a Second Team All-Star nod and allowed him to win the Hap Holmes Trophy for fewest goals-against in the AHL.

Kurt finally got a jump in the 1971-72 season as the California Golden Seals took a chance and played Kurt in 16 games that season, where he finished with a 1-7-5 record for the lowly club. Conversely, Kurt also played in the AHL for the Baltimore Clippers, finishing with a 12-4-1 record in 17 appearances.

During the 1977-78 season, Kurt played only three games for the Central League's Oklahoma City Blazers (no record) before retiring from pro hockey. After a year hiatus, Kurt returned to play in the Ontario Senior League with the Cambridge Hornets for 19 games before giving up the game for good.

A big goalie ahead of his time, Kurt had to deal with being put on an expansion team in the NHL; which knee-capped his career there in the big league. Luckily for him, the WHA was able to pan out to give him a memorable identity for those who followed that rival league. Yet, many would have to wonder that if there wasn't a logjam elsewhere if he could have been a solid goalie-- especially for his size.
Posted by ScottyWazz at 8:00 AM