Can't Jet From The Past 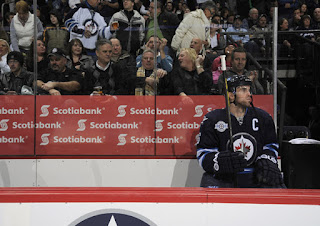 Something I've been hearing, and Glenn Healy hammered it home Saturday afternoon, is that there are many people who still refer to the Winnipeg Jets as the Atlanta Thrashers, mostly for their craptastic playing style and their streakiness that has come to be. It makes me wonder why this has been such a wide-spread thing and how come other teams weren't given as much flack about who they used to be after a move.

For instance, you didn't see people rag on the Avalanche for playing like the old Nordiques, but they had the benefit of scoring one of the best goalies in our era in a trade and winning the Stanley Cup their first year in Denver, which almost all but erased the Nordiques from their history.....literally.

The Stars and the Hurricanes don't get the look back at the North Stars and Whalers, but both have won a Cup and both really have a lot of different cogs from when they moved to Dallas and Raleigh. Hell, even the Phoenix Coyotes don't draw the parallels to the old Winnipeg Jets, unless it was to bring up the past of the franchise never making it past the 1st round of the playoff for the longest time, until last season. The last team to really get razzed for their organization is Wayne Gretzky calling the New Jersey Devils a "Mickey Mouse Organization." Whether that had anything to do with them moving from Kansas to Colorado to New Jersey, who knows-- but it could possibly be.

But what makes these new Jets the target of the relocation fodder?? Is it due to many of the parts from the Thrashers still being there or is it due to so many people being connected and it living on by a word being spoken, thus triggering a memory?? It could be all of it or none of it, but it's hard for these Jets to actually get a true identity with the Thrashers comparison looming over them.

Even with their local writers comparing them to their former selves, it's hard for them to avoid it. Of course, to think that it'd be a quick fix is a daunting task. In fact, they play more of a disadvantage with the division they play in, the conference they are in, and the players they still get into their organization. You'll get those kind of things when you don't make that huge splash on the ice that was made off the ice. While True North Sports and Entertainment may have a path they want to take, in a "What have you done for me lately" world, it's not going to be enough-- especially with the crazed fans pining for a team to come back having to deal with these growing pains.

Maybe the thought of them still being the Thrashers would motivate them, but it seems that the minute the lose that mantra, something always brings them back down. It may take a five-year cycle for them to actually get going and getting their own identity, but I'm sure they'll get to where they want to be-- especially if they can take advantage of the realignment and not having to travel as often as they do now.

Until then, the carry-over players (Andrew Ladd, Evander Kane, Dustin Byfuglien, Ondrej Pavelec, et al.) will have to do their best to exorcise the demons that haunt them from their short times in Hot-lanta. If they truly want to put an identity out there for themselves, they'll find a way.
Posted by ScottyWazz at 9:03 AM