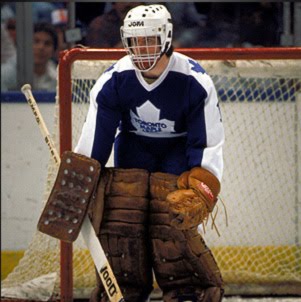 In this week's AGM-- many things to be taken away were the disorganization of his organizations goaltending situations could be the reason for his career demise. However, if nothing else can be taken away,  this week's AGM was involved in two franchise relocations while he was on the roster. This week, the profile of Tim Bernhardt.

Starting in the 1974-75 season, Bernhardt got started with the Sarnia Army Vets Junior A team, but would soon move onto the QMJHL to play for the Cornwall Royals, where Bernhardt finished the 1975-76 season with a 24-16-9 record in 50 games, then a 4-4 record in the playoffs. In the 1976-77 season, Bernhardt played in 44 games and finished with a 24-12-6, then going 4-5-3 in 12 playoff games (ties happened in the QMJHL playoffs, with goals counting toward the final total). During the 1977-78 season, Bernhardt recorded a 35-13-5, then went 5-4 in the playoffs; as well as playing in the World Juniors for Canada, in which they would take home a Bronze Medal.

In the 1982-83 season, Bernhardt spent most of his time back in the Central League, but with the Colorado Flames, compiling a 19-11-1 record in 34 games, then going 2-3 in the playoffs. Also that season, Bernhardt got the call-up to Calgary, where he would go 0-5-0 in six appearances with the Flames.

After hockey, Bernhardt went into scouting-- joining the Dallas Stars staff in 1993, being promoted to Director of Amateur Scouting in 1998, but let go by the team in 2011.

While stuck in the minor and then trying to get through the Ballard years in net for the Maple Leafs, Bernhardt didn't get a too much a chance to shine when he was given the chance. While he did have some ups and downs in the minors, the downs may not have been able to be helped considering the organizations he was in.
Posted by ScottyWazz at 8:00 AM