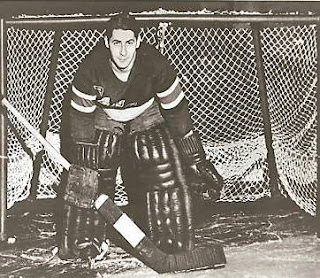 This week's AGM is a guy who got passed around from team to team, but never got traded once. He played in a time where injury and war stripped many teams of their players and goalies-- which is where a back-up or third-string goalie would not only provide depth, but also give options for other teams. This week, the profile of Jimmy Franks.

Franks started in the South Saskatoon Junior League with the Regina Pats, playing in two regular season games in the 1932-33 season before helping the Pats get to the Memorial Cup finals with a 7-3-3 record, but going 0-2 in the Memorial Cup Finals to lose to the Newmarket Redmen. The 1933-34 season had Franks stay in the SSJHL, but with the Melville Millionaires, but he would be in the Junior "A" league in the 1934-35 season with the Kerrobert Tigers.

With Franks advancing to the Senior Leagues, he moved to the Prince Albert Mintos of the North Saskatchewan Senior League for the 1935-36 season, playing in 18 games with an 11-6-1 record, then going 5-2 in seven games of the Allan Cup playoffs.

The Detroit Red Wings signed Franks in May of 1936 and put him in the AHL with the Pittsburgh Hornets in the 1936-37 season, playing 20 games and finishing with a 8-9-3 record, then going 1-0 in the playoffs. However, due to an injury to goalie Normie Smith; Franks got called up to the Red Wings for the playoffs-- lossing his only appearance, but still got his name engraved on the Stanley Cup that the Red Wings won. Franks returned to Pittsburgh for the 1937-38 season, going 3-4-2 in nine games, while winning his only game as a call-up to the Red Wings. Franks again returned to Pittsburgh for the 1938-39 season, sporting a 16-14-3 record in the 33 games he played, as well as playing a game with the Syracuse Stars in the AHL (a tie) and four games with the AHA's Kansas City Greyhounds (3-1-0).

It was an odd 1942-43 season as Franks was loaned out to the New York Rangers by the Red Wings as a war-time replacement for Jim Henry. With the Rangers, Franks played in 23 games and posted a 5-14-4 record. Also that season, Franks played with the Pittsburgh Hornets of the AHL and had a 1-3-0 record in four games of work.

For the 1943-44 season, the Red Wings and Franks were at odds at Franks' demotion, leading the Red Wings to suspend Franks for not reporting to Indianapolis. At the end, Franks was able to agree to playing just road games for the Red Wings, going 6-8-3 in 17 games, while also being loaned out to the Boston Bruins for a game against the Red Wings, where he would lose the game to his own team. Franks also spent a game with the Buffalo Bisons, which was a win.

With so little spots around, Franks was able to get into some games because of war-time and due to other goalies being injured. In that kind of cut-throat time, he was able to get whatever he could get and while he didn't thrive in those times, he was able to make his mark in some way, shape, or form.
Posted by ScottyWazz at 8:00 AM